Having a home birth was one of the coolest, most intense, most rewarding and physically challenging things I have ever done. After it was over I just kept repeating, “That was insane. That was insane.” I have never had to push myself to do something that physically and mentally challenging, ever. I know that many women choose to have a natural childbirth. the natural part was what was hard, but what was “cool” was that it was in my house. I chose to have a home birth mainly because I don’t like hospitals and doctors. What started me down the path was that we didn’t have maternity insurance so our hospital bill was going to be a bout $10,000. I refuse to pay that much money to be in a place that I dislike and disagree with most of those people around me. Over the last few years I have grown to disagree with a good bit of the medical community and am skeptical of the “rules” by which society feels that should live by and eat by. Anyway, enough about my soapbox.

I interviewed many midwives and finally met the one that I would trust to deliver my baby. She just made me feel comfortable and I liked her immediately. The funny thing is, she never actually made it to the delivery of Miller. She arrived about an hour or more later. Her two assistants are the ones that delivered the baby. Luckily, I had already met them and liked them as well. Honestly, when it comes to the delivery of your child, by the time you are ready to deliver the baby, you don’t really care who is doing it as long as it gets done and the baby comes out sooner than later. Here is Miller’s story…
I started to have contractions in the middle of the night on November 21, 2011. I prayed that i could fall back to sleep and I did. When I woke up around 7:00 the contractions started again, but very intermittently, enough to know that today was the day. Tom and i dropped off the kids at my parents and school and went to Walmart to grocery shop and try to get the contractions going again. By the time we got home and unloaded they started up around noon. When they started, they started in full force. Tom was timing them and they were consistently occurring every five minutes. He started to get a little excited/nervous and kept telling me to call the midwife. I thought that i would have many, many hours before she would need to be there so I quit telling him about the contractions. Finally after 15 minutes tom asked “have you had any more contractions?”. I fessed up and said, “yes, three or four of them.” Tom, in all his wisdom, thought it would be wise to get my mom to come over and help start to set things up.
So mom and Faith came over to set up the birthing pool, get the hose hooked up, and put out all the supplies that were on the list that we would need. I am so glad that she came over when she did. It was nice to see Faith too. Faith was so excited. She was jumping around and helping to lay out the drop cloths and set up. I am glad that she was there. However, by 3:00 it was time for Faith to leave. The contractions were really kicking in and I didn’t want her to see me in pain. My dad came to get her and I immediately got into the birthing pool. It felt great! The warm water really helped to alleviate some of the pain and it just felt good. I floated around in the pool while the contractions continued to come over 4 minutes or so.
By 4:00 I was really in pain. Tom was great. He would come over and let me squeeze his hands throughout every contraction. It really helped. I needed something to hold on to. Mom was still here and was helping where she could, but by this time she was really just sitting on the couch, taking it all in, and keeping record of the contractions and their length. The midwife’s assistant, Bethany, finally arrived at 4:20. She came in, listened to the fetal heart beat, and talked to us. Of course, by this point I am really in pain and don’t remember all of the exact details. (These are the details as I remember them). I am the eternal talker. I would even talk in between contractions about the random things in my head, such as, “Good thing tomorrow is trash day”, “How do you know if I am dilated?”, etc.
I heard Bethany mention something about going to the bathroom. I hadn’t been in a long time and I thought that I still had a while to go so I said that I would try going. I really just thought that it would be something else to do….I love a project and being busy!

I got out of the pool and hobbled to the bathroom. I had on a tank top and my bathing suit bottoms. I decided it was easiest just to pee through the bathing suit, no need to put forth the effort of taking it off. I sat through some contractions on the toilet but it was really uncomfortable and hard.
I got up and walked into the living room. Tom and I faced each other while he helped to support me while standing up. It felt like I was standing there forever. The contractions were really bad and I began to whimper and call out to God to make it stop. I have never called out to God like I did, especially in front of other people. It hurt so bad. According to mom’s records they contractions were lasting one minute and were only two minutes apart. I only had a minute break in between….probably why it felt like an eternity!
After standing there for about 5 minutes, swaying from side to side and crying out (whether I was really crying out or just crying in my head is still debatable), I felt the baby move down in the birth canal. I literally felt him fall and inch or so. At this point I started to repeat, “The baby is coming out! It is coming out!”. Julie, the other assistant, quickly took off my bathing suit bottoms. The next contraction came. As if in a movie when they scream for strength to do something difficult or run into battle, I screamed and pushed with all my might. it was amazing! I pushed while standing up in my living room. The baby’s head came out with that one giant push. I knew that I still had a lot of contraction left and thought to myself, “I am getting the baby out right now! It is not getting stuck half way out like Wilson did!”. I pushed again while screaming for strength and out came the baby! He just fell right out of me and was caught by the midwife.
Amazingly, he was still in the sack when he came out. The sack ruptured as he was caught. I continued to cry out “it hurts. It hurts’. everyone kept telling me that the baby was out, which I knew, but it still hurt! Miller was born! It was 4:56 pm, according to my mom’s watch, and I had just had a baby boy! It was very exciting.
After the birth I got back into the birthing pool to hold the baby and to relax. it was awesome! The pool felt so good and let me just sit there and relax and recover. Miller was wrapped in a towel in my arms. the warm water kept us both warm. I kept saying, “That was Insane”. I also like to describe the whole scene as, “intense”. Tom later said, “I didn’t think it was that intense”. To which I responded, “It was intense on my end!”

That is kind of what it looked like.
After about an hour, I was able to climb into my own bed, hold my baby, and eventually go to sleep for the night. No one woke me up to take my blood pressure every two hours or give me Tylonol. I was able to sleep through the night, feed my baby, and to remain comfortable. That was the best part! I like to say that having Miller at home was my “grand finale”. He will be my last baby and I am so glad that I was able to have him brought into this world in my own home. He was born in a peaceful, loving environment. He wasn’t given a shot immediately or taken away to be measured and weighed. He was held in my arms and kept warm by me. It was amazing. I am so proud of myself for deciding to have a home birth and having the courage to do it. It was physically and mentally challenging, but I did it. I can say that i did something truly difficult and pushed my body to do something that I didn’t know I had the strength to do. ”Strength” is a word that I will use to describe this experience and what it took for me to accomplish. 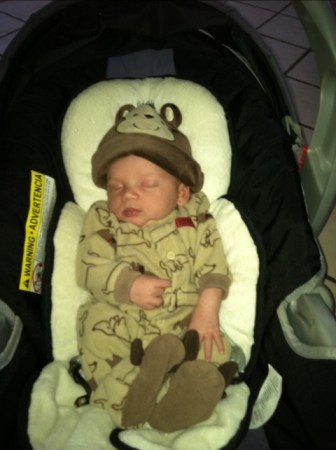