I have decided that the sweetest and calmest parts of my day are the 5-10 minutes that I send cuddling Miller right before I put him in his bed. I usually feed him right before he falls asleep for both naps and for the night. After he nurses he has to be burped or else he will wake up within about 10 minutes and be very unhappy. After he falls asleep laying there and eating I get to pick him up and hold him until he burps. This usually takes about five minutes since babies don’t burp when they are asleep. I get to hold him and rub his head with my cheek. It is so sweet and peaceful. I know that he won’t be like this forever and so I am glad that I get to enjoy it a few times every day.

We went to Monkey Joes the other night at Park Road for Hannah’s birthday party. Monkey Joes is a kid’s bounce house place that the kids love. It has jumping castles with big slides and obstacles. The one on Park Road is the best of the three locations for smaller kids. Wilson had been asking to go for weeks so he was very excited. We had a lot of fun as a family. The kids are such a great age. For the first time I knew what it was like to sit down and socialize while my kids played. I always look at the women at the pool who can sit down and relax and not wear themselves out chasing their kids. For once, i was one of those moms. I have a very small window right now that allows me to be the one sitting around instaed of chasing kids. In a few months Miller will be crawling and those days will be over for another two years. Anyway, that part was great. I was also able to see some good friends that I have been missing.

Wilson did a great job at Monkey Joes. He is turning into such a cool kid. He ran around, played and jumped either by himself or with Faith and Sam. He was having the best time! Wilson is so smart and fun. Today he dressed himself up in gloves, sunglasses, boots, and a bike helmet. He said that he was one of the Sand People from Star Wars. He even had a golf club that he was using as a big long gun. He was hilarious.

Here is a picture of Wilson as one of the Sand People and one of our family at Monkey Joes. We actually have a picture with all five of us in it. 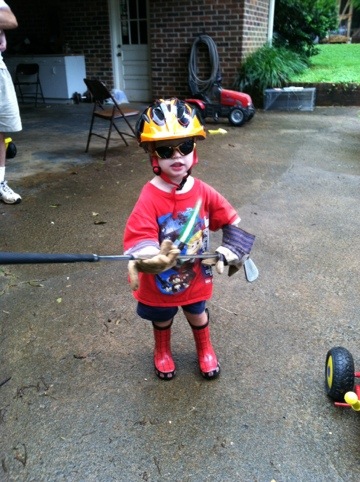 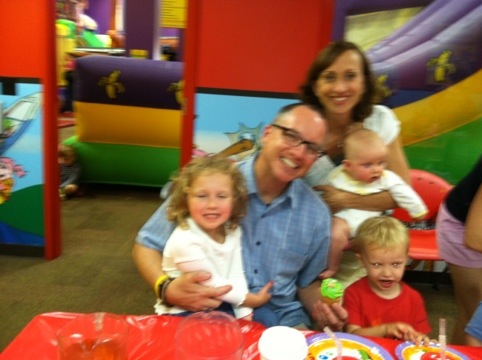 Today I was reading the book, “I love my brother” to Faith and Wilson.  It is a simple story about why a child loves him/her brother.  I don’t remember what page we were on but Faith looked at Wilson and said, “Just like I love you, Wilson! Come here and give me a hug!”.  She leaned over to him and gave him a big bear hug. It was priceless.  They then proceeded to wrestle on the couch, laugh and play together.  I loved it.  There is almost nothing better than a sibling to love and have fun with. I want my kids to be best friends.  Faith has been so patient over the past year.  We have had to teach Wilson to be kind.  A phrase around the house was “we hug, not hit”.  Every time Wilson would go to hit Faith I would make him hug her instead.  It really worked!  I think Faith flinched every time Wilson came near her.  It has taken about 6 months for Wilson to learn to use his words and be sweet to his sister.  He really does love her, he just needed to learn to express himself in words and not hitting.  I have felt very proud as a mother twice this week.  Yesterday Faith’s school asked if I wanted to apply to be a teacher there.  She said that my kids were so sweet and well behaved that I must be a great mom and teacher.  Another mom at the playground today said, “Your children are so well behaved.”  I am flattered that these two women see my children in a positive light and how that reflects on me as a mother.  There are a lot of days when they aren’t so well behaved, but thankfully, there are more when they are.  It takes a lot of work to cultivate love, kindness, and gentleness in a household with children.  I am glad that my hard work is paying off.

Do you remember the cartoon “The Flintstones”? Well, the Flintstone’ neighbor, the Rubbles, had a little boy named “Bamm-Bamm”. Bamm-Bamm would take his big club and hit things while yelling, ” Bam!Bam!…Bam!Bam!” today I was at the playground with Wilson and he picked up a stick and started yelling, ” Bam!Bam!”. I had to laugh. He even looks like Bamm-Bamm. Wilson and I had fun at the playground today. We drug 7 foot sticks around behind us and then I used a stick to fix his “broken screwdriver” (which was actually another stick). I am slowly learning how to play with a boy. I am really having to take my time and focus on Wilson. Everything is a tool or a gun. It is fun to pretend with him. Tom asked him tonight what he wanted to be when he grew up. He said, “A bad guy! The biggest bad guy ever!”. (of course he said it with a loud, gruff voice) He is the only kid I know that wants to be a storm trooper when he plays Star Wars instead of being Luke or Han. He really makes me laugh. What an original kid. I love him! 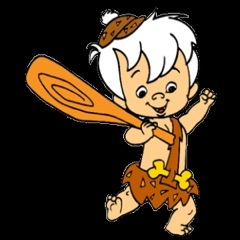 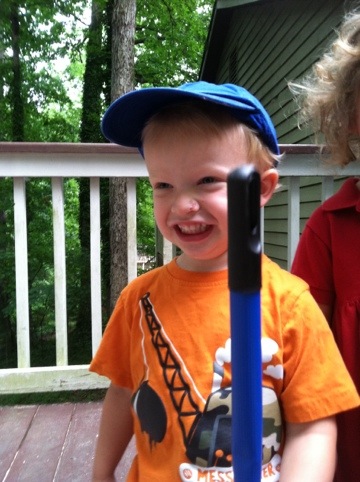 Today we woke up with a plan.  I asked Faith last night what she wanted to do today and she said that she wanted to go to the Nature Museum.  She woke up this morning with the same plan.  I was up by 5:15 am so I was ready to go somewhere by 9:00.  We usually don’t go anywhere on Tuesdays.  A few months ago I decided that Tuesdays were our “at home together” days.  This was due to my realization that the kids were never at home together and that they had no idea how to play peacefully and happily together.  We were always at someone’s house, the playground, or had someone over here to play.  After a morning of breaking up fights and hearing them cry, I had what I called “kiddie boot camp”.  We stayed at home for three full days and learned to play together nicely.  The first day was rough, but the next two were fun.  After that, the kids had so much more fun together and could really play together peacefully.  It was worth the work!  Anyway, today is Tuesday and we are supposed to be at home, but I decided that going to the museum together with no one else was close enough.  It was lots of fun!

First we went to the Charlotte Nature Museum which is a very small children’s museum with snakes, turtles, a woodchuck, a skunk, bugs, lizards and a butterfly garden.  There are little activities for them to do, books to read, and puppets to play with.  You can do a full lap of the thing in twenty minutes if you wanted to.  We usually do a couple of laps.  Today we just went slow and then had a nice snack.  After about an hour we loaded up our things and walked to the playground that is down a trail and around the lake.  The kids ran most of the way there while I pushed Miller in the stroller.  They played on the playground and in the sand box until it really just got too late and too hot.  It is supposed to be 90 degrees today.  Around noon we headed back.  I knew that the kids would be tired on the way back to the car so I planned ahead.  (I used to have an in-line double stroller, but we never used it.  Like I am going to go to the mall with two kids!)  When Wilson was a baby I had figured out a way to take two of them in the Graco stroller.  One used to sit in the main part while the other would stand on to the front and ride backwards.  Well, now that I have three kids we had to alter the ride a little bit…..here is a picture of our new “triple stroller”.  I carry Miller in the Ergo, one kid rides in the bucket seat and the other holds on to the front.  Works great! 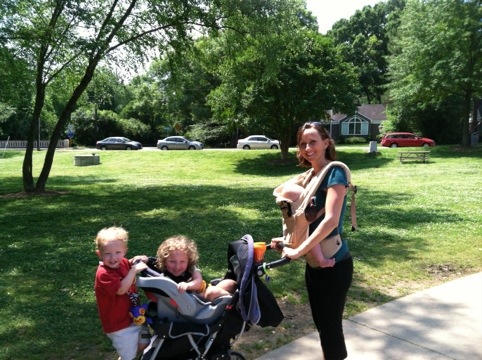 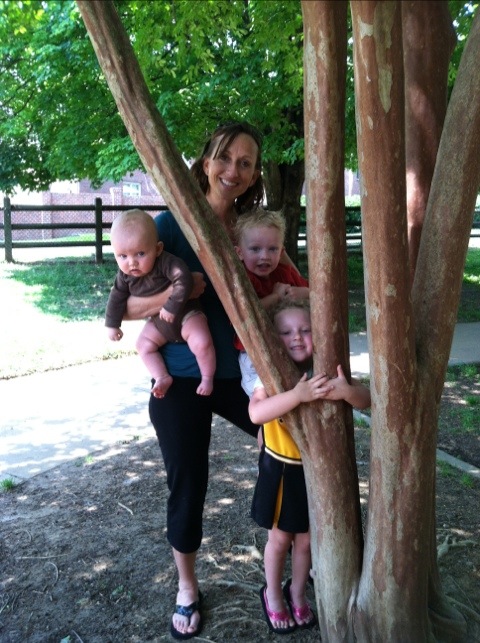