Did you know that there is an aquarium at Concord Mills?  Well, there is. Last month I found out that they were going to have a homeschool week with discounted prices so I put it on our calendar for our first field trip.  In preparation for our trip we studied marine animals for a few weeks. It was best part of our homeschool for two weeks. We all really enjoyed learning about sharks, sea horses, sting rays, eels and other fish. Wilson, in particular, really  enjoyed having me read to him each day. I leaned a lot about how he learns through this study. We will have to do more focused learning like this one.

The aquarium is small but was enough to entertain us for a few hours. The best part was seeing the kids excitement when they saw a fish that we had studied before hand. Their eyes would light up. It was inspiring.  We each had a favorite part of the aquarium. Mine was the giant tank that we could walk through and see sharks, Rays and fish swimming above us. 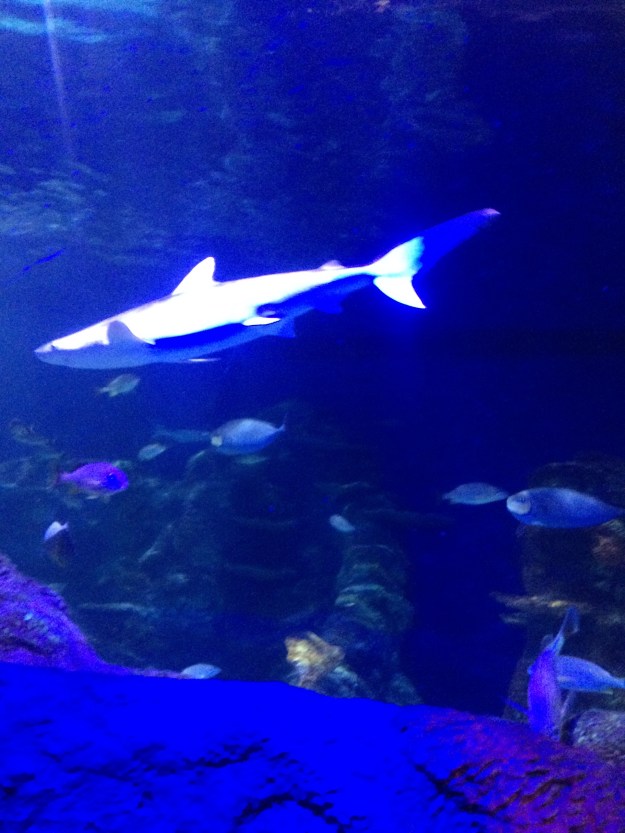 Wilson loved the six foot Moray Eel. That was his favorite fish that we studied and he was excited to see it in person.

Faith liked the tour that went upstairs above the giant tank. She enjoyed seeing the sea tutle and looking down into the water. 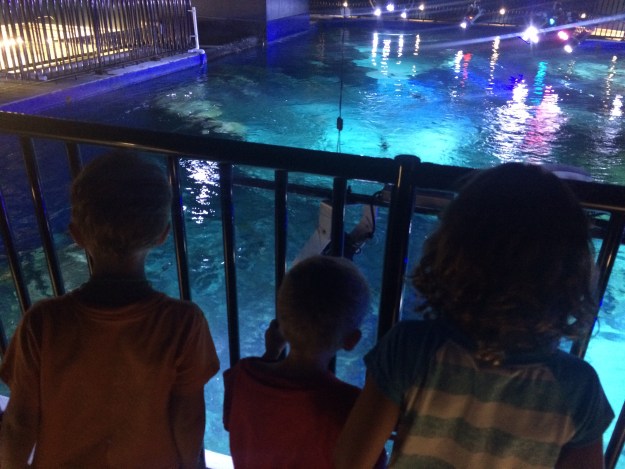 Miller’s favorite part was the moon jelly fish and their corresponding lights.    With the turn of a button the whole tank would change colors and so would the jelly fish. Very cool.

The aquarium even had a small playground in it which gave the kids a place to run around an me a place to sit down.  The aquarium had a focus on the conservation of sea life, which really hit home with wilson. He was upset that seahorses and Sharks were being killed for sport, soup or medicine. I agree with him.  This trip and our study of fish was good for all of us. I could have fun learning along side of the kids and then we could take a trip that reinforced the learning. It was the perfect homeschool scenario. Now, only if all of our days were this easy and fun….. 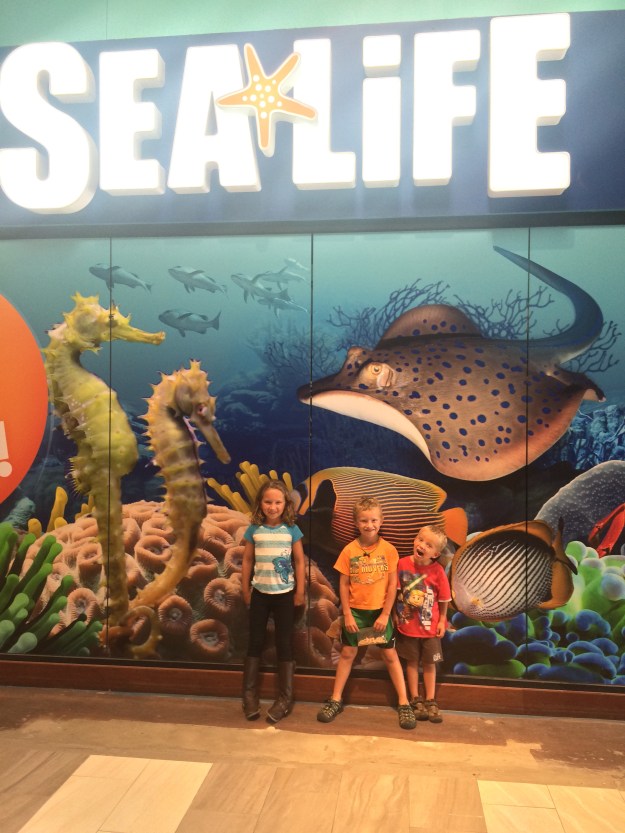 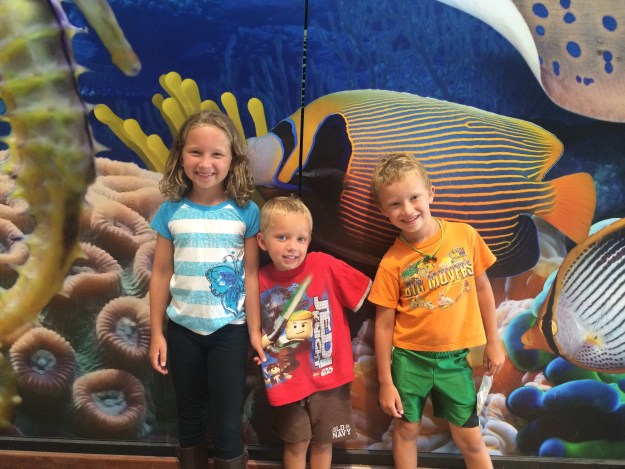 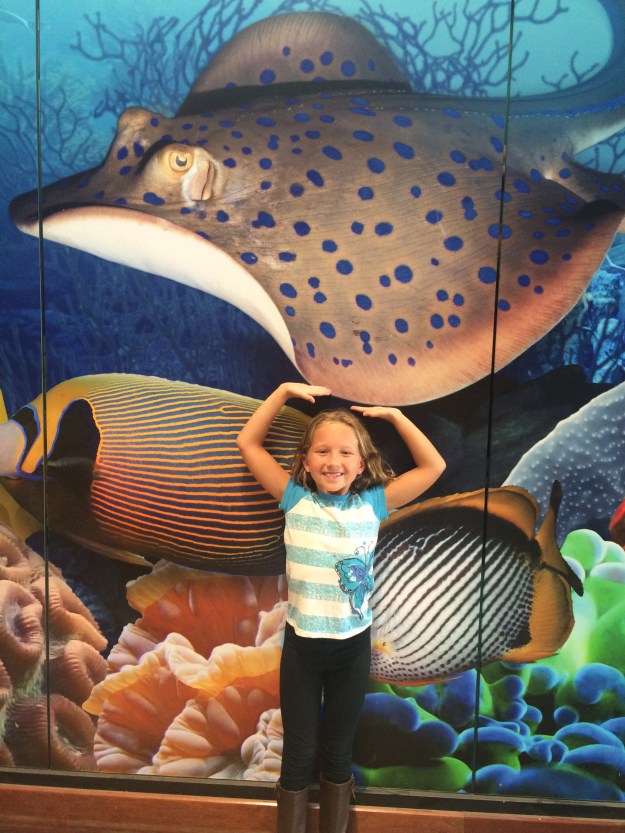 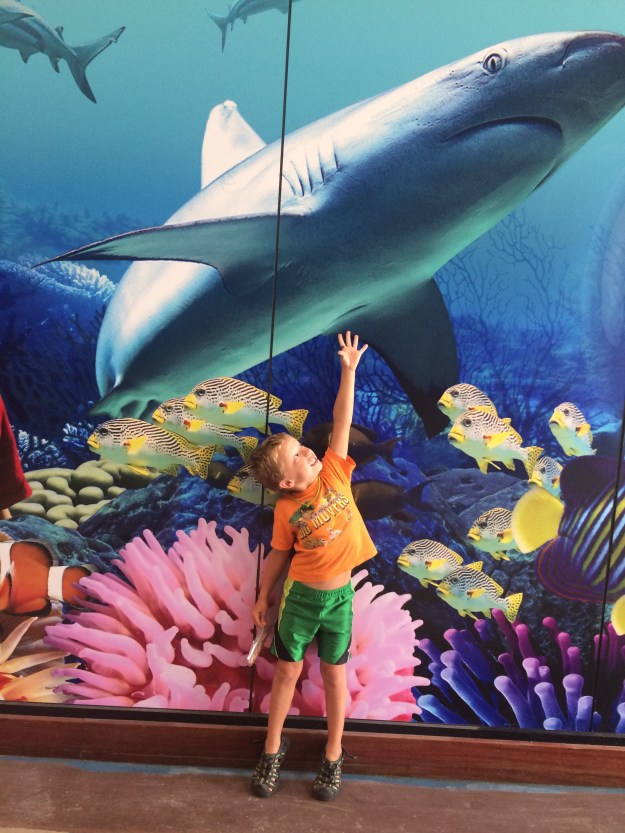 One of the best parts about homeschooling is that we can go on vacation any time we want.  I have been wanting to take the kids to Disney World for a few years and my wish finally came true (as wishes do at Disney).  I was able to magically get tickets to the princess breakfast at Cinderella’s castle on September 8 so this pretty much dictated when we would take our vacation to Disney.  It turned out to be the absolute perfect time to go to Disney World.  We left for Florida the morning after Labor Day while everyone else was heading to work and to school. We left early that morning and drove all day until we reached our hotel around 5:00pm.  I booked rooms at the Caribbean Beach Resort (which was one of the cheapest hotels that slept 5 people).  It was perfect.  There was a decent pool next to our building, but only a short walk away was the giant resort pool.  We spent the whole first night swimming there and then they showed a movie outside near the pool.  The kids stayed up late every night and were up early the next morning ready to go again. 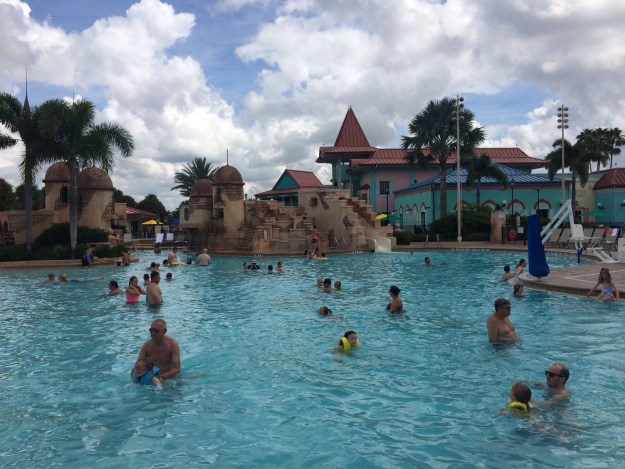 Because Disney is super expensive and I hate waiting in lines, I decided that our first Disney vacation was plenty long with two days in the park.  Honestly, I don’t know how people do more days than that.  Tom and I walked twelve miles the first day and a eleven the second.  We were wiped out.  Of course, because we were only there two days we were there when the park opened and stayed until they kicked us out each night.  I loved it!  I didn’t think that I would enjoy Disney World as much as I did.  I truly did not want to leave.  It didn’t hurt that we had booked early enough to get free dining (which is available only during sept and oct) and there were zero lines.  And when I say “zero lines”, I literally mean that there were zero lines for 80% of the rides at both Magic Kingdom and Hollywood Studios.

The main goal for our first was to do some Jedi Training at Hollywood studios. It was totally worth the effort. I was psyched that they got to fight Darth Vader. I think I was more excited to see Darth than they were. In my book, he is the ultimate bad guy. I think I was a bit star struck…. 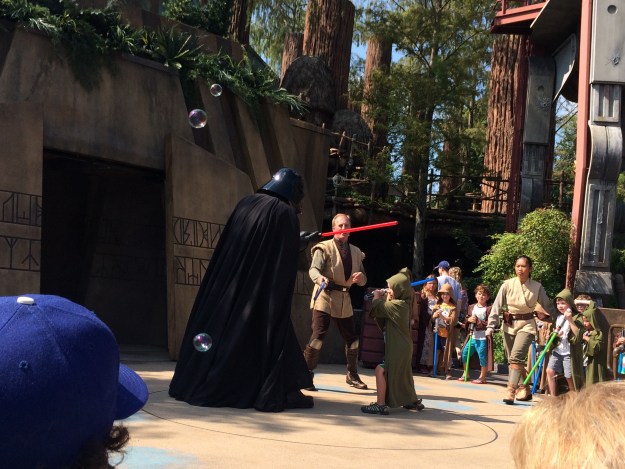 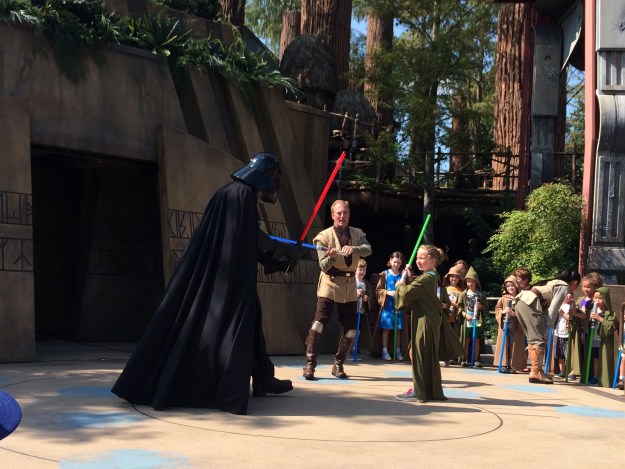 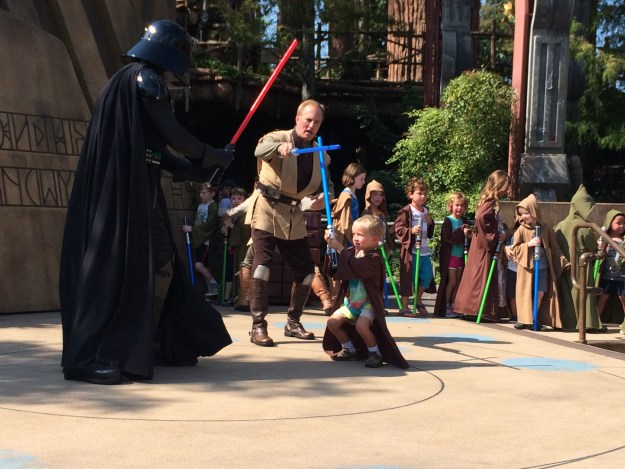 After doing each ride twice, we headed over to the Magic Kingdom for the rest of the day (it was open until 11pm).  We walked our 12 miles, snacked, ate dinner, did more rides, and eventually left completely exhausted at 10:00pm. I couldn’t take another step. Tom even warned the kids not to do anything to set me off. I “was on the edge.” Lol.

The next morning Faith and I woke up early to go to the Princess Breakfast at Conderella’s castle.  It was adorable. It seriously brought me to tears to see Faith so excited about this and I was so thankful that I could give it to her. (With the Lord’s help, of course.). We met many princesses and got a photo and signature for each. 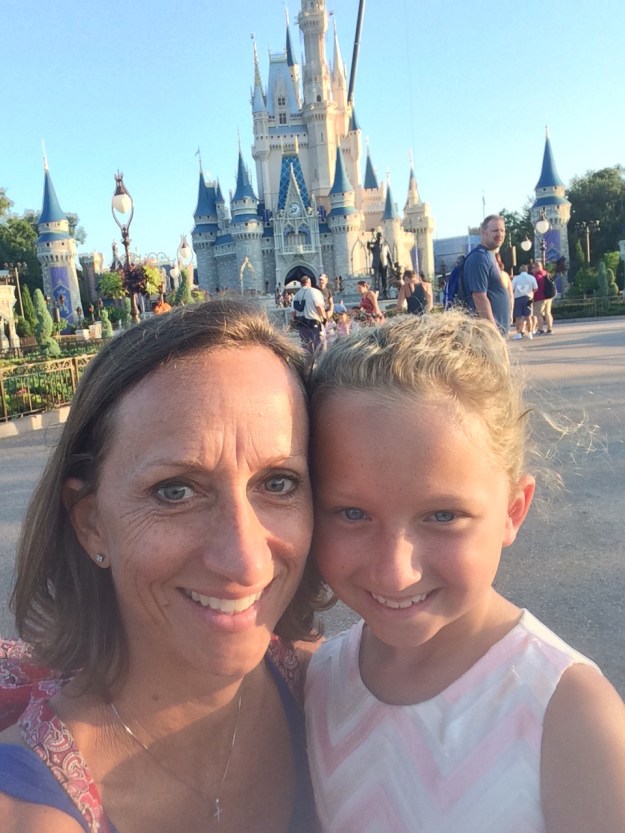 The rest of the day was filled with ride, junk food and family fun together.  We watched another light show at Hollywood studios that night and then hit the pool.  It was the vacation the we didn’t want to end. The next day we went to Amelia Island and enjoyed the beach before we headed back home. It was an amazing escape from reality for our family and I would do it again in a heart beat.

We have home schooled for one week and it is harder than I thought it would be.  I have been told by other homeschoolers that there are great days and bad days. I can see why. It is hard to motivate your own children to work and to make it as “fun” as a classroom teach would make it. For some reason they do seemingly boring tasks willingly for a school teacher but complain for me. I have to figure out how to plan better and to make the work more fun (according to Faith).  The most difficult part is trying to teach two grade levels. I have I figure out how to teach one child while keeping the other one occupied and productive.  I am currently having one play on the computer for twenty minutes while I work with the other for twenty minutes and then they switch. Or one does handwriting while the other does math and then they switch. I think that once they stop complaining, and we work out a system, it will be better. Miller also starts preschool on Monday which will make it easier as well.  I was going to let him stay home with us but he will have much more fun at school and I will have one less child to entertain during our school  hours.

One thing that is working well is that the kids get up out of bed in the morning and go straight into the home school room ready to work. I am amazed that they do this, especially wilson.  If we can just figure out how to get the work done then we will be finished before lunch.

It is definitely an adjustment for everyone, but for me, it is better than rushing around, paying for school tuition, and never seeing the kids. I know that this is what we are supposed to be doing this year and that feels good. God gave me this desire years ago and now I am being given the opportunity to fulfill it.

Here are some pictures of when things were going well last week:

I personalized their desks that I got on Craigslist by spray painting them. Faith wanted pink and wilson wanted bright blue. They look fantastic…. 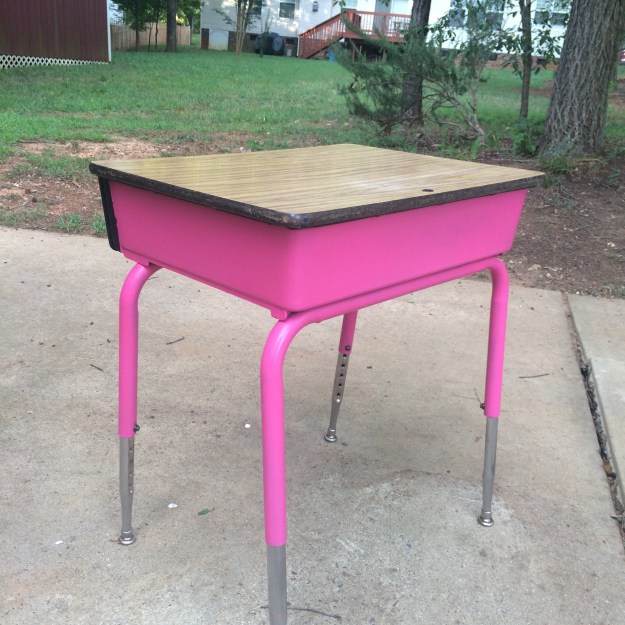 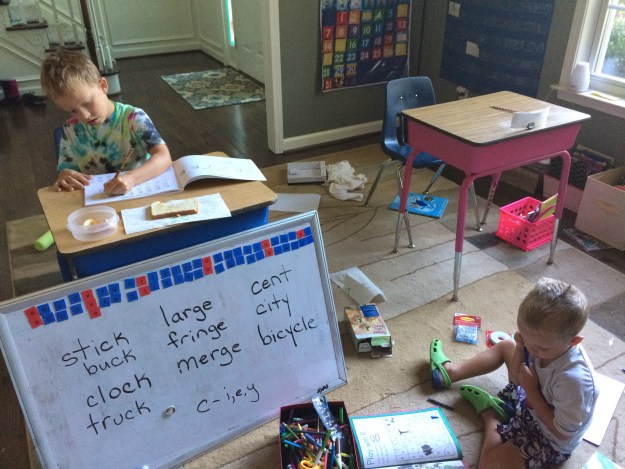 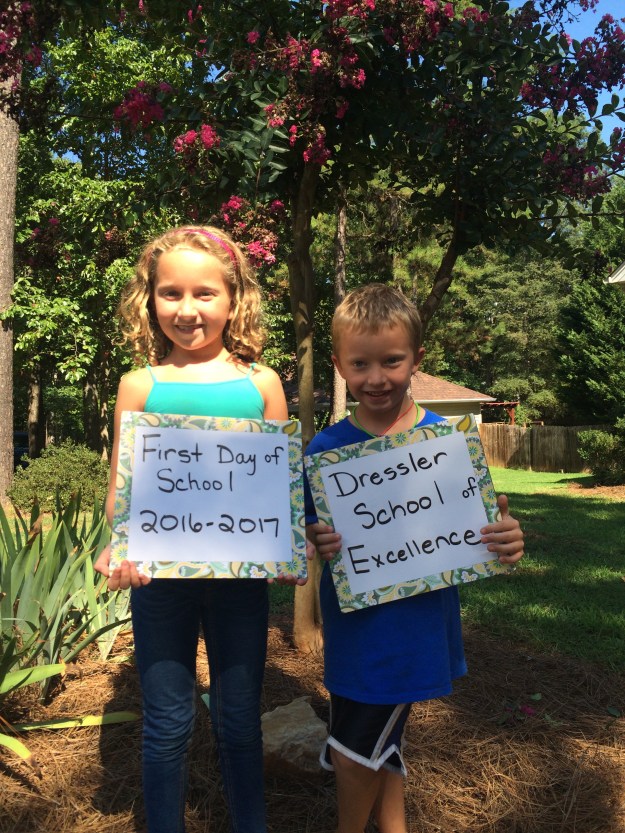 When the kids got antsy I had them run up and down the stairs five times. They loved it…. 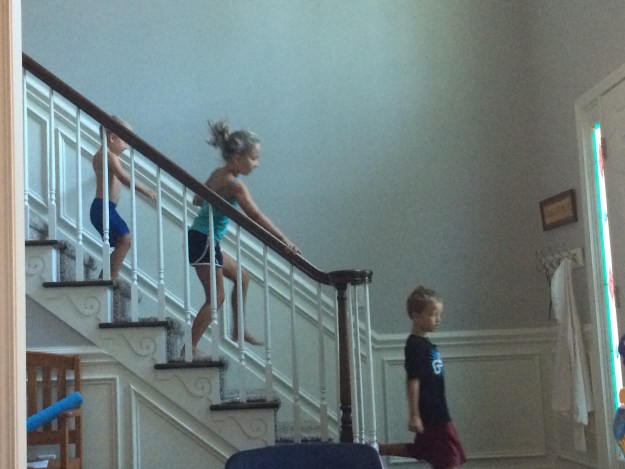 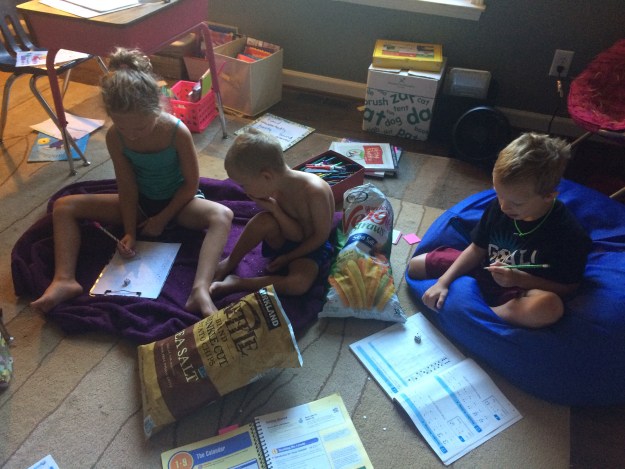