I am great at buying Groupons because I love a good deal.  However, I am not so great at using them.  Most of the time I am forced to use it the week before it expires.  That is exactly what happened today.  A few months ago I bought a Groupon for five roller skate rentals plus five hotdogs and drinks for $10.  What a deal!  I had to use it today because it expired the day after Christmas.  Fortunately for us, it was perfect timing.  No one was at the rink today.  Tom and I took Wilson, Faith, Will and John to Kate Skate in Indian Trail, NC.  Wilson and Faith had never been before.  I was hoping that Faith would really like it since I had already bought her roller skates for Christmas.

It was an experience.  Will and John had already been skating before so they laced up and were off skating pretty quickly.  Experience had taught me that it is much easier to skate on the carpet than it is to skate on the wood floor.  So, Faith and Wilson first got their balance on the carpet.  I started teaching Wilson while Tom taught Faith.  I learned two things right off the bat:

1.  Wear very hard shoes when trying to teach a child to roller skate.  And I mean “hard”.  Not sneakers and definitely not Toms (which I had on).  My feet got kicked and rolled over numerous time.  Roller skates are very heavy and very hard.

2.  Rent one of the rolling metal crutches for the new skater.  Brilliant!!

Ever seen one of these bad boys? 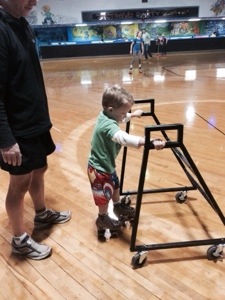 A metal rolling walker that the kid pushes on his own.  We didn’t have to do anything, especially get kicked, rolled over or have our arms hurt because we were holding him up.  Wilson did much better on his own anyway.  It was amazing!  He loved to go fast.  He skated all over the place.  I was so proud of him.  He isn’t usually one to continue to try something over and over until he gets it, like Faith does.  Faith is very determined to succeed at almost everything she tries.  Wilson usually gets bored and moves on to something else.  Not today!  He said that his favorite part of the day “was going fast”.  Of course it was!  This is Wilson we are talking about!

Faith was doing pretty well on her own.  She could stay up and basically walk around the rink.  I didn’t realize until the end of the day that her wheels had been tightened to the point that they barely rolled.  This was helpful.  Wilson’s were loose and moved quite freely.  This was a terrible thing when he was holding on to our arms.  This was a fantastic thing once he got a “walker”.

Now, did Faith enjoy rollerskating enough to want them for Christmas?  I have no idea.  I think she will be excited but also a little nervous to try them at home.  I hope that she loves to roller skate as much as I did as a child.  I don’t remember every having trouble learning to skate, but I know that I loved skating.  We will find out the answer to this question in two days.

What I thought was going to be a very short trip to the roller skating rink ended up being an almost three hour stop.  The kids had a blast.  Once again, we had a great time doing something new together.  Will and John even slowed down to take a few laps with Faith – which was probably her favorite part of the day.  They are her heroes!

Here is the gang getting ready to take their first spin around the rink….. 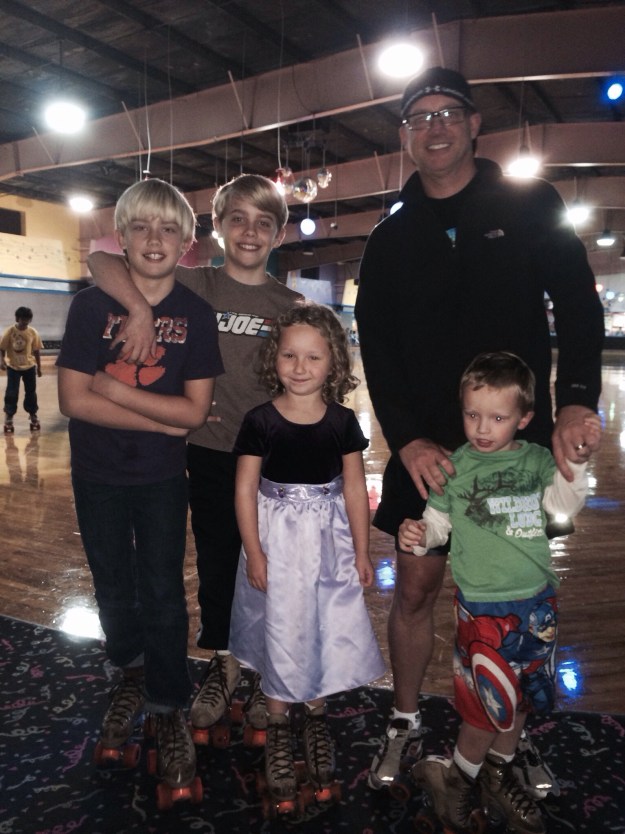 Will, John and Faith taking a short break…. 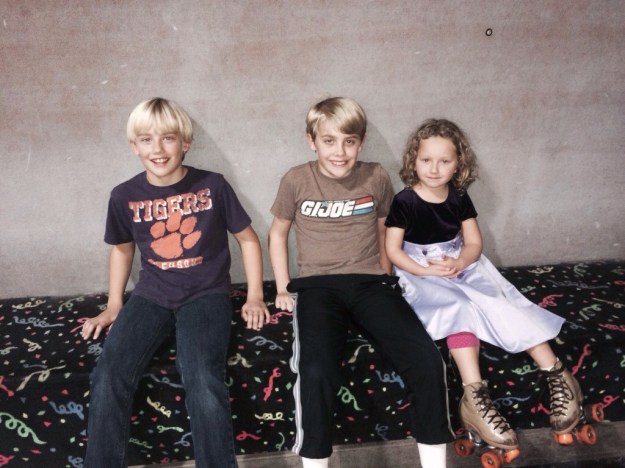