Now that Wilson is not in preschool, Miller and I have another playmate during the week.  We all had a great day together on Thursday.  To start, I was in Miller’s class during CBS because it was our group’s week to help out in the children’s department.  If I have to be in Children’s then I really like to spend that time in my own kid’s class.  It is always nice to see how he interacts with his classmates and teachers.

After CBS the weather was gorgeous!  We headed straight to the playground next door to spend a few hours.  During that time, Wilson and I had a good game of “throw the gum ball” going.  Now, this isn’t gum that you chew, but the gum balls that come off of a gum ball tree – they look like round pinecones.  At first we threw them at each other, but then began to try to make baskets into the trashcan with them.  This took up at least thirty minutes.  Miller caught the moment on camera. After the park the boys began to beg me to take them to Chick Fil A.  Now, I usually don’t take the kids to a fast food joint, especially now that I read the ingredients to a Chick Fil A nugget.  (Did you know that MSG is the third ingredient! Yuck!)  But…..the weather was great and I knew that they would continue to play which would allow me to sit and take a short break, so I did it.  We headed over to Chick Fil A for some nuggets and an ice-cream cone.  It was heavenly.  The boys played while I sat and basked in the sun.  Here I am with my boys… 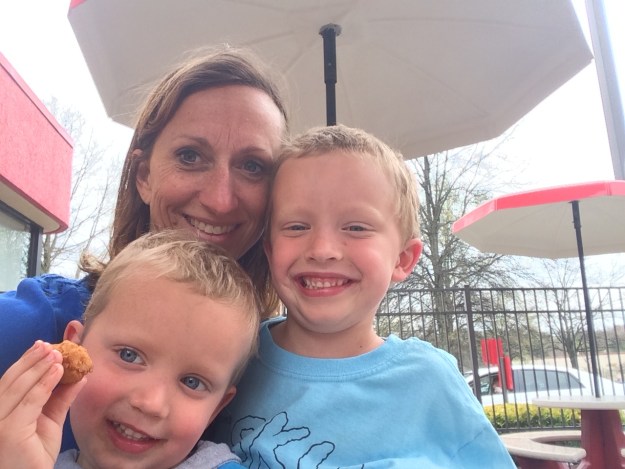 The boys were so tired when we finally got home that I laid in bed with them to take a nap.  Wilson fell asleep immediately and I tried to sleep while Miller continued to climb all over me.  Eventually Miller did find something to entertain him so that I could sleep for a short while.  A ten minute nap is all that I require in order to rejuvenate myself and make it through until the end of the day.

It was a wonderful day.  The best part was that I got to spend the afternoon having fun with Wilson and Miller.  We spent lots of quality time together doing things that were fun and exciting.  I have really enjoyed having Wilson with me and look forward to more days like this. one.