Today we began a new chapter in the kids’ education – Faith and Wilson both had their first day at Metrolina Christian Academy in Indian Trail, NC.   Wilson was very excited to begin kindergarten.  I had no worries about him adjusting to his new environment – he is very social and loves school.  I had almost glaced over the fact that he was indeed starting kindergarten and another one of my babies was leaving the nest.   I think that I was overlooking it because I was so concerned about Faith and her liking her new school.  For weeks she has been telling me that she was scared and that she just wanted to go to Covenant Day (her old school).  I felt so horrible that I was taking her away from her friends and putting her into a new situation where she knew no one.  She is so shy and timid, and I could truly empathize with how she was feeling and it made me sad.  At one point I regretted enrolling them and thought that we should have homeschooled so that I could be with them more and so that I could protect Faith from scary situations such as this.  I cried for her this morning when we dropped off the kids, but felt joy when I saw Wilson run into his classroom ahead of us.

The funny part of this story is that last night when I went to drop off Miller at my parents’ house so that he could spend the night (and we could have one less child to get ready this morning), Miller wanted to stay with me and Faith and Wilson wanted to sleepover at my mom’s house.  Surprisingly, Tom and I let the two of them sleep at my mom’s while Miller came home with me.  It was a blessing in end because I could easily put Miller to sleep, pack lunches, and wake up effortlessly in the morning ready to go.  We picked up the kids at 7:15am and all drove over to Metrolina.

We took a picture of Faith and Wilson on top of the birthday rock.  Maybe a new tradition…. Faith and I did a pre-school selfie.  We were ready to go in, together…. 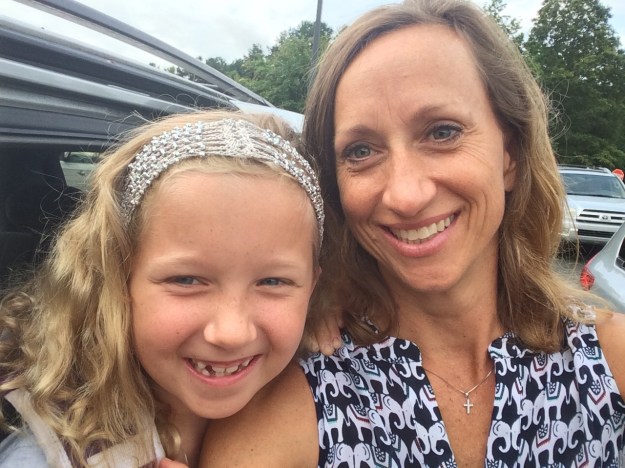 Wilson was so excited for school that he was almost running down the hall towards his classroom.  I even heard Tom say, “Don’t run anyone over!” as he chased Wilson through the crowds.  He wore his favorite shirt and shorts for the special occassion…. After I picked up the kids from school, Wilson came up to me and his first words were, “That was fun.”

I asked Faith if she liked school and she smiled and said, “Yes.”

Those are both two very good signs that we made the right decision when it came to choosing a school for the kids.  It was a positive ending to a sad (for me), exciting (for Wilson) and scary (for Faith) morning.