Wilson turned six on October 12.  My little wilson is six. I guess he isn’t so little anymore, but he is still super sweet, loves to cuddle, loves to sword fight, loves school, and loves to watch TV.  I tried to talk him out of having a birthday party, and I thought that I had thoroughly convinced him, until five days before his birthday he told me that he wanted a party.  How was I supposed to throw him a party when I didn’t know any of his new friends from school and it was already a Thursday?!?

Being the super mom that I am, I scoured old emails and the MCA school directory for the six kids that he wanted to invite to his party.  I was able to get in touch with two preschool friends and three families from his new school, including the triplets – six kids. Perfect!  From now on I will be planning all parties five days in advance because it significantly reduces the number of attendees and pressure to entertain them.

Because our house is such a disaster from packing and moving my mom graciously offered up her house again this year to hold the party. We had a small bounce house, a trampoline, a swing set and some chickens to entertain the kids. They loved it!  The party was a success!!

Wilson and my mom baked the cake that morning…. 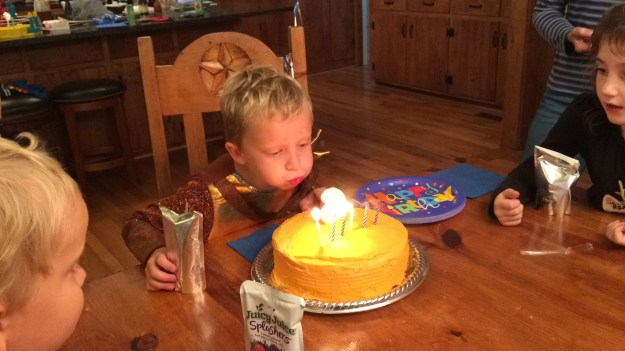 My dad helped bounce the kids…. In the middle of the party wilson came to find me so that I could play his new favorite toy, Rockem Sockem Robots, with him. I was flattered that he wanted to play with me during his birthday party. I was so touched that I got a picture of it…. 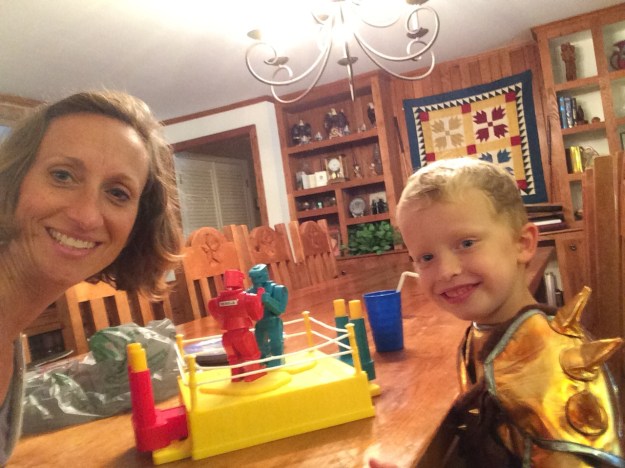 Wilson is truly a blessing to have in our family. He has really grown up over the last few years and I am very proud of him. His smile is contagious and I am so thankful that he is mine.