It seems like I have been going to a lot of funerals lately.  Last week I went to my Aunt Judy’s funeral, who had lost her fight against cancer.  This weekend I went to my mother-in-law’s funeral, who also lost her fight against cancer.  It seems that more and more people are losing their battle against cancer, and it is troubling. Although I could totally get on my soapbox at this point, I won’t.  This post is about Rebecca Rogers – Tom’s mother, my Mother-in-Law and my children’s Grandmother (Maw-Ma).

I cannot imagine losing a parent.  Although Tom knew that it was coming, I don’t think he, or anyone else, could ever be fully prepared for the actual event.  I am thankful that he was there with her when she went to heaven.  As a Christian, it is comforting to know that a loved one, and fellow believer in Christ, is immediately in heaven with the Lord when the heart stops beating.  We miss the person here on Earth, but we also rejoice in the new life that is given in heaven.  Rebecca is now in heaven with a new body that is no longer sick. In that, we rejoice.

I have to say that one of the hardest events of the last week was telling the kids that Maw-Ma had passed away.  The children literally cried and wailed, Wilson especially.  He was really looking forward to going up to see her again so that he could say good-bye to her. Wilson is a sweet and sensitive little boy, and although he didn’t pay Maw-Ma a lot of attention when in Pennsylvania, she was still his grandmother and he loved her.  Faith spent the most time with her;  they would color together and Maw-Ma would teach Faith about the Appalachian mountains and the Susquehanna River.  We were planning to go up to visit this past weekend, but instead of a visit with her, we went to her funeral.  It is sometimes amazing how we make plans for one thing, but end up doing another on the same day.

The funeral was a nice memorial of Rebecca.  There were many scriptures that she wanted to have read which allowed many loved ones to come up and speak.  She wanted to be remembered for her faith in Christ.  She knew who her Lord was and hoped that she had pointed to Him throughout her life.  I am sad that she is gone and I know that she will be missed.  She loved her family dearly and was committed to showing my children how much she loved them and wanted to be with them.   I know that they will miss her as well.

Here is one of my favorite pictures of Faith and Maw-Ma…. 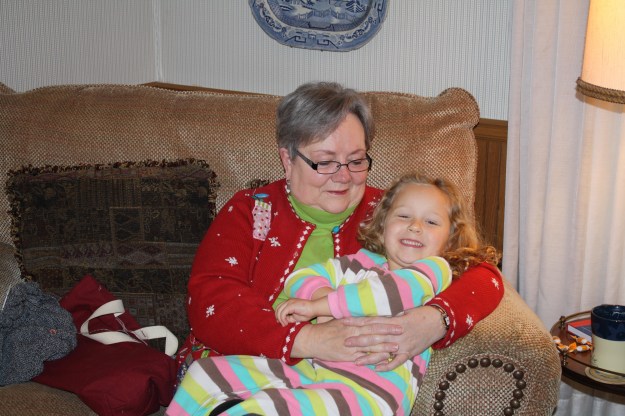