We have been trying to go apple picking for weeks, but it wouldn’t stop raining.  I swear it has rained for two straight weeks and Hurricane Joaquin didn’t help us at all.  It finally cleared up this past weekend so we headed up to the mountains to pick some apples.

This year we knew a bit more about Sky Top Orchard and thought it best to get our apple doughnuts first while the kids played. They are delicious and the line is thirty minutes long, but worth the wait. Tom stood in line and came back with eighteen doughnuts for the five of us. He said he felt silly waiting in that long line and only get twelve. I have to admit that the first twelve were gone rather quickly but were unable to eat the last six. We brought them back for my dad.

I went to grab the baskets to put the apples in and instead of three small baskets, like last year, I got four. I knew that it would be an insane amount of apples but last year I gave so many away that I regretted not getting more.   As much as tom tried to tell me that it was too many baskets, I persisted and brought the four baskets with us anyway.  (The story of our marriage)

The kids climbed the trees to pick the choicest apples and we easily filled up the four baskets. We could have picked more but we could barely carry back the baskets that we had. All together we picked an astounding forty two pounds of apples. Yes, 42 pounds.  We have given away or eaten twenty pounds already but we still have twenty more to go. We can do!  No problem.

Apple picking is about much more than the apples – it is about spending time together, having an adventure, and continuing a family tradition for as long as we can….the apples are nice as well. 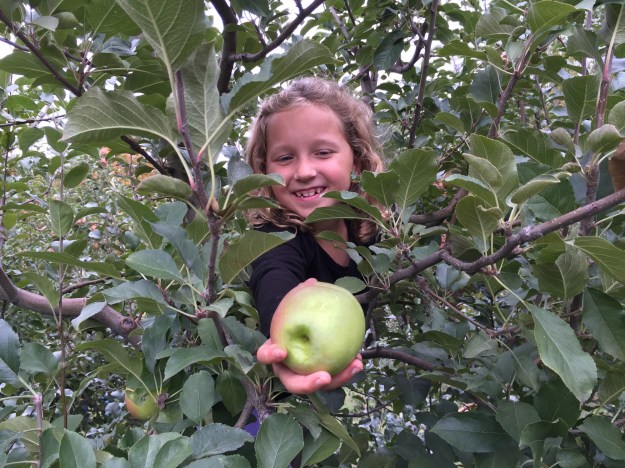 Wilson is in there somewhere… 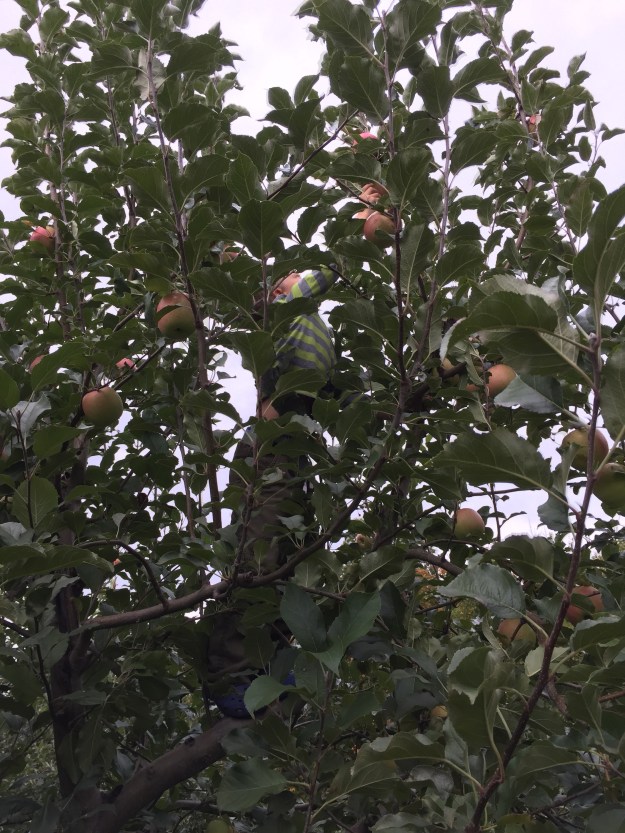 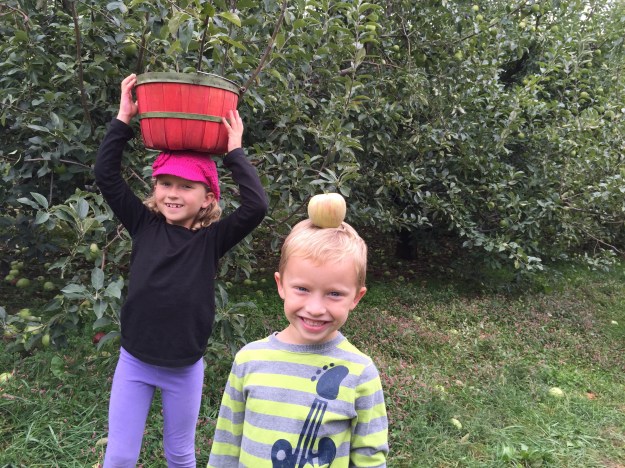 We always have to have a silly picture… 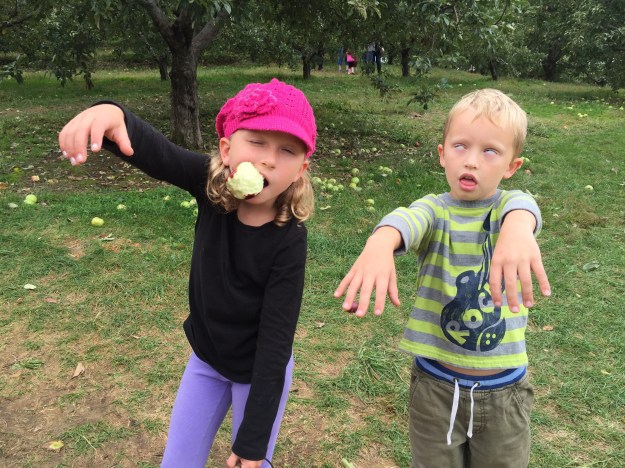 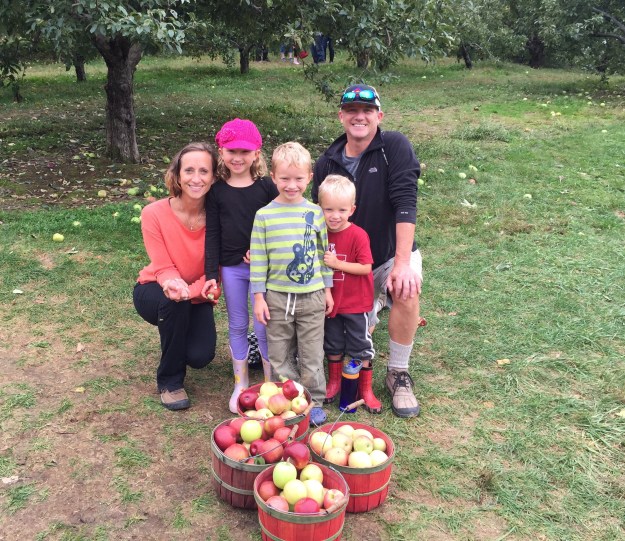 My Aunt Lisa told me numerous times how much fun their family had picking apples at the Sky Top Orchard in the fall.  This year I decided that the kids were old enough to enjoy picking apples and I actually remembered to schedule a time to go.  (The latter typically being the issue.)  At the last minute, we decided to skip church on Sunday and drive up to the mountains for a fun, family adventure.  We were in need of a day dedicated to having fun together.  There are so many things going on that we rarely get to spend an entire day together with just the five of us.

We woke up Sunday morning and finally hit the road around 10:00am for a two hour drive to the mountains.  Amazingly, the kids didn’t watch the iPad until we were almost there.  Faith and Wilson played and lovingly annoyed each other most of the trip.  We went old school!  When we did arrive, I was amazed at how many people were at the orchard.  The huge parking lot was full.  Luckily, we found a spot right next to the gate (this would come in handy later on when we needed to carry 30 pounds of apples back to the car).  This orchard had it all:  a playground, an apple orchard, grass to lay in while the kids played, a bamboo forest, and doughnuts.  Here is our family selfie…. 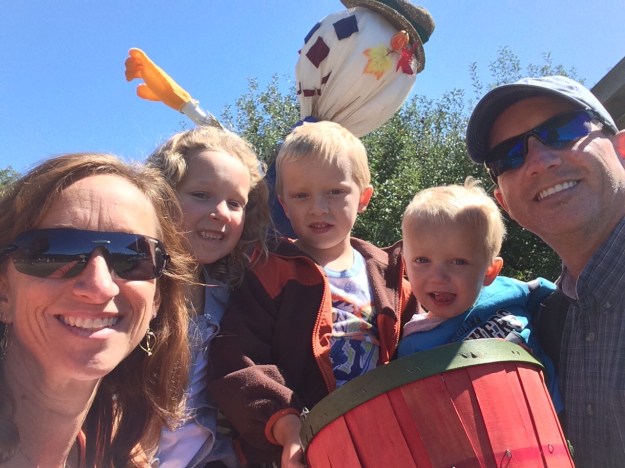 I love this picture of us in the Bamboo forest with the sunlight shining through the bamboo (Wilson is in the background)…. 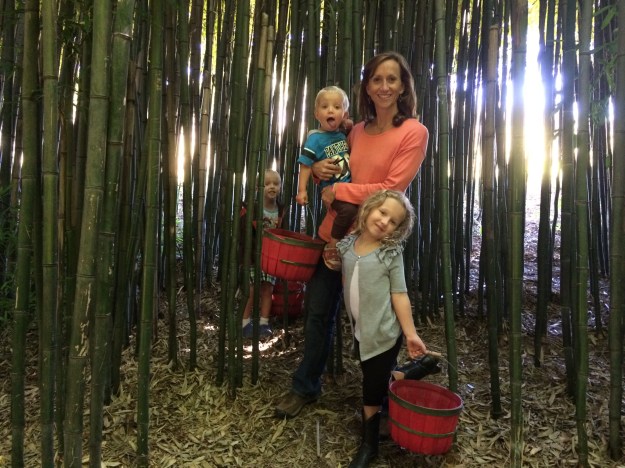 Thankfully we had a map so that we could find the types of apples that we wanted.  I discovered quickly that some apples taste much better than others.  I decided that taking a bite of an apple was worth breaking the rules so that we could limit certain varieties.  I know that we will be baking with some of the apples we bought.  Others will be going to Faith’s school as snack for the class (Thanks for the idea, Nikki!).  I gave a full bag of them to my mom so that she could feed them to all of the kids that will be over there this week.

Some of the apples were hanging within reach of the kids.  I was surprised by the number of good apples on the ground…. 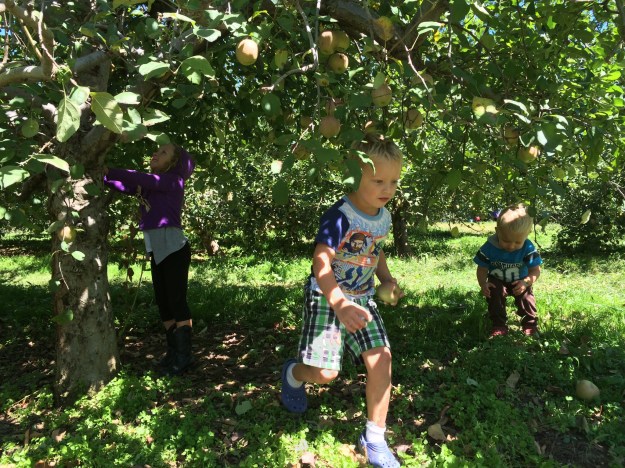 Tom lifted up Faith and Miller so that they could reach some of the “Pink Ladies”…. 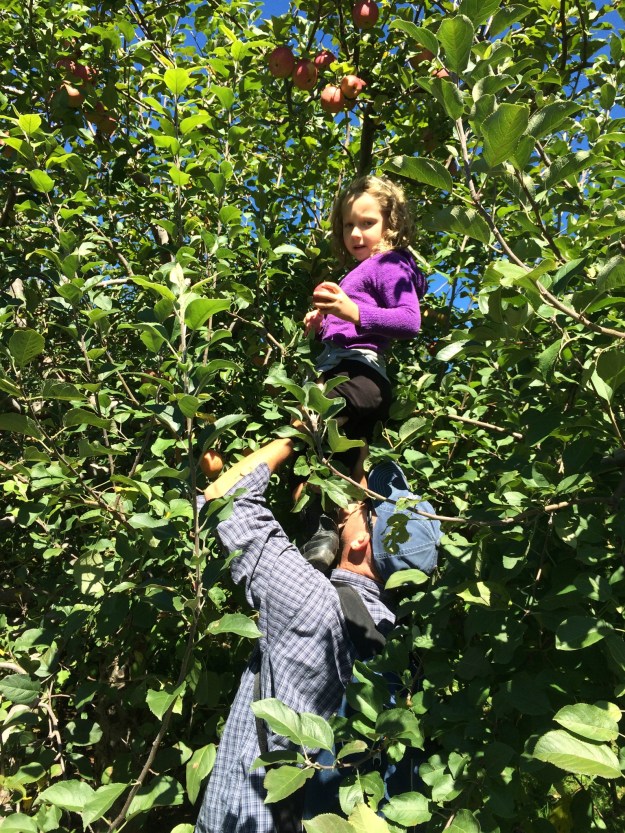 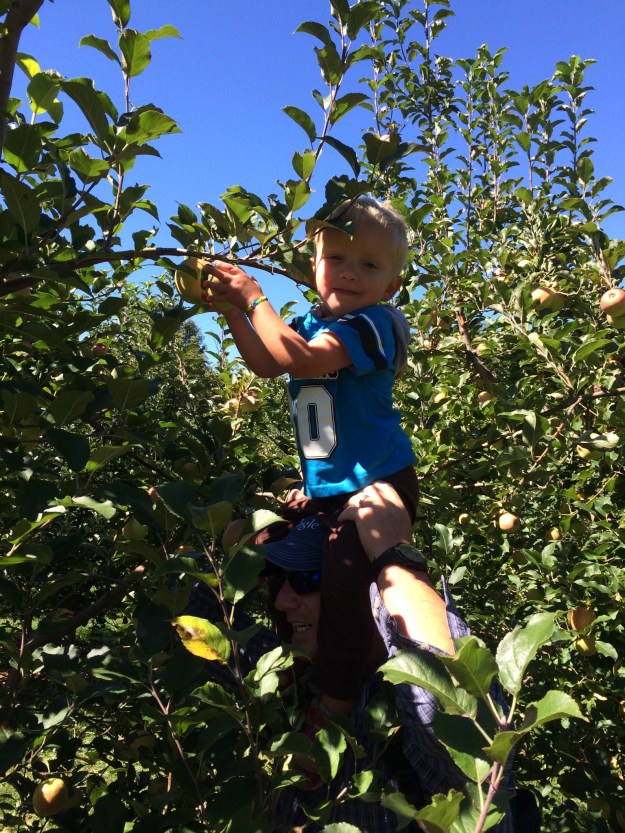 I am glad that I grabbed only three small baskets for the kids to put their apples in.  These three baskets contained 30 pounds of apples.  I am also very glad that the apples only cost $1.09 per pound! 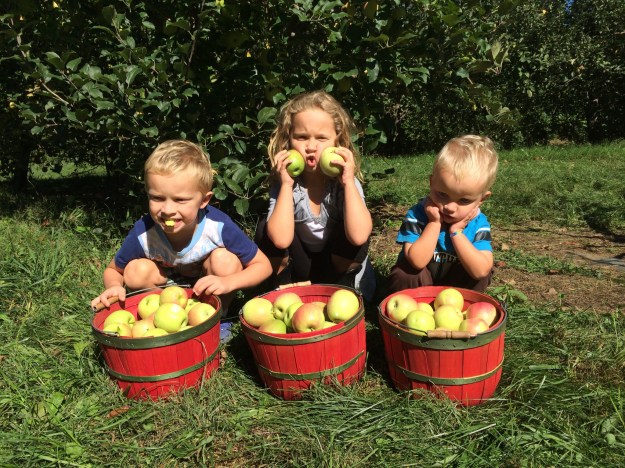 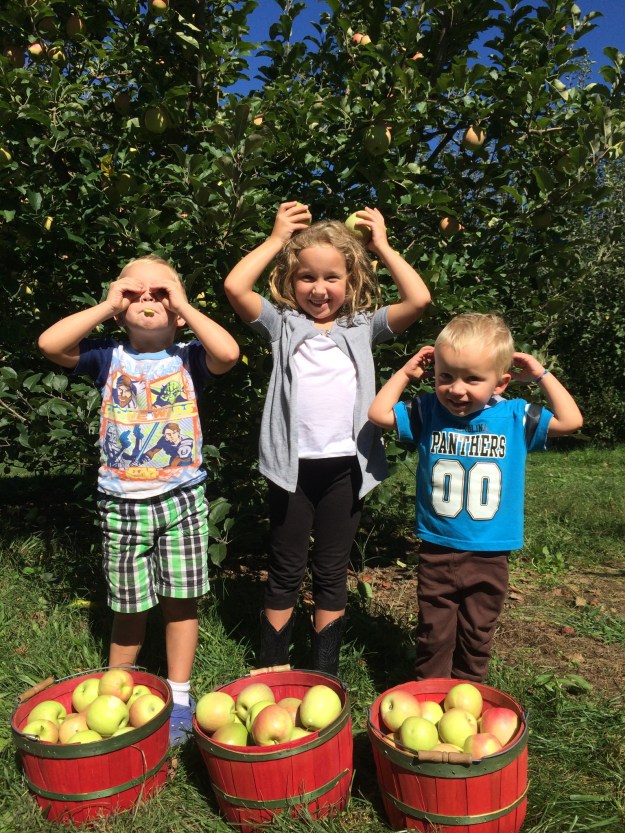 Along with its apples, this orchard is also known for its apple doughnuts.  When we first arrived the line for the doughnuts was about twenty minutes long.  I thought for sure that the line would get smaller as the afternoon wore on.  Unfortunately, I was wrong.  By the time we were ready to buy doughnuts, the line had doubled and there was a forty minute wait.  Tom got into the doughnut line while Faith and I waited in line to pay for the apples.  Being the good husband that he is, Tom waited in the long doughnut line while I relaxed in the sun holding Miller as he slept.  The doughnuts were incredibly delicious.  They were similar to a Krispy Kreme doughnut, but were covered in cinnamon and sugar and were a bit greasier.  We only got six of them, but next year we will be getting a dozen.  One just wasn’t enough.

We had a wonderful day outside together while doing something different.  Different is what we all need every once in a while.  We needed to break out of the usual pattern so that we could enjoy life and enjoy each other.