Wilson had his last day of school at Cross and Crown on Thursday.  He had a great school year.  This was Wilson’s first year at school and I am so glad that it was a good one.  His teacher was Miss Michele.  She was fun, relaxed and encouraged the kids to get dirty and have fun.  It was the perfect combination for Wilson.  Whenever we were late she just said, “Who cares! It is preschool!”.  She also loved Wilson for who he is: an energetic, silly, caring, smart and fun little boy.  When I tried to get her to switch him to writing with his right hand instead of his left, she just told me, “He will be fine.  Don’t worry about him switching.  His handwriting will improve and he can still be a lefty.”  She was right!  His handwriting finally did start to improve and he continued to use, and insist on using, his left hand.  It is just part of who Wilson is as a person.  He is unconventional in almost every way.

Cross and Crown has been such a blessing in our family’s life.  They are so sweet and caring at that school.  I am so glad that we decided to send our children there.  Wilson will be there for TK next year.  He will go four days a week (which will be hard for me as a mom because I want him to go less) but I know that he will like it.

Here is Wilson and Miss Michele.  He insisted on keeping the lollipop in front of his face…..of course. 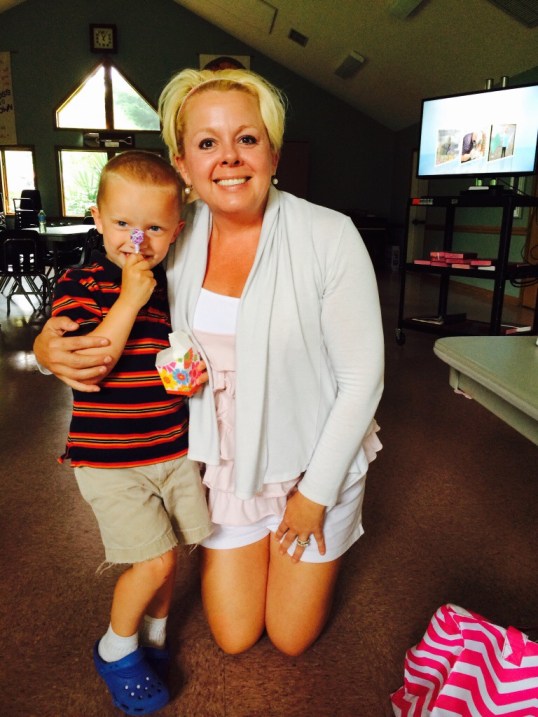 Wilson had his spring show at school on Friday night. This was by far the best show that they have had at school. Miss TiLisa out did herself. Now just to be clear, the show was more of a singing performance than a play, but it was really good.

Each class came into the sanctuary to sing as a group. Wilson’s class sang three songs. The theme was Music Through the Decades. First they sang the song by Stills “Every body stop! Hey what’s that sounds very look what’s going down…” Next was “Beat It” by Michael Jackson. This is where Wilson was the star and had his own special part. He and another boy did the moonwalk down the center aisle. It was awesome! He had been practicing at home.  We got it on film but I haven’t loaded it up to YouTube yet.  From where we were standing it really looked as if he were gliding across the ground, just like Michael (although in reality he was really just walking backward).  He did a superb job during the whole performance.  He has really grown up a lot this past year.  At Christmas they sang songs during church and instead of singing, Wilson stood up front, made faces and tried to annoy Faith.  This time he really sang all of the songs and new almost all of the words.  I was vert proud of him.

The final song was Katy Perry’s song, “Roar”.  It has become a new family favorite and is the number one requested song during our family “Dance Parties”.  Even Miller is singing the lyrics. Wilson picks up my phone and turns it on so he can sing all of the words along with Katy.

The show was a huge success and very fun for us all.  I am proud of how grown up Wilson has become.  He has changed so much over this last year.  I guess he has gotten used to having a baby brother and is feeling more secure than ever.  He and Miller have finally started playing together.  Their new favorite activity is wrestling.  Wilson lays on the floor and lets Miller jump on his back and pin him to the floor.  Very entertaining and sweet.  I am sure that we will have many more years of wrestling ahead of us.

Here is Wilson singing.  It is a bit blurry because we had to zoom in order to see him.  Unfortunately we sat on the wrong side of the church.  In real life we could see him just fine.  Hmmmmm….maybe I should have brought my good camera with the new zoom lens that I got for Christmas. 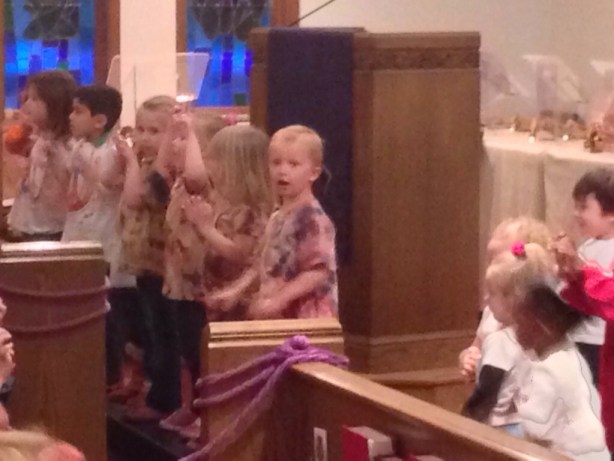