On Sunday my little Wilson turned five-years-old.  He has grown up so much over the last six months to a year.  He is so much more mature and kind to his brother and sister.  He uses bigger words and seems to understand things more logically.  Maybe it is because he is going to school four days a week, but maybe it is just because he is getting older.  Lately, Wilson has begun to build things with his Trio blocks.  He gets a bit upset if the spaceship he built breaks, but then he just builds another one and moves on.  It is so neat to see him mature in so many ways.  Wilson’s favorite thing in life are: play “baby”, sword fight, play spies, watch television and drink milk/juice non-stop.   He also loves his friends from school, and they love him.  He is quite the ladies man.  One parent told Tom that the girls all love Wilson because “he is respectful and makes them laugh.”  What more can you ask for as a parent than that?!?!   Wilson is my little cuddler and I love it when he crawls into bed with me in the morning and snuggles in.  He is a sweet and active little five-year-old.

For his birthday he wanted a Super Hero party with Goldfish, Pirate Booty, and juice boxes.  (I don’t typically buy those food items….you know, GMOs….)

It was his birthday so I let him have whatever food he wanted.  I even bought him a pinata and filled it with lots of yummy candy.  Of course, I offset the candy with my deliciously homemade, all natural, gluten free, GMO free cake. I can’t completely cave, people!!

Mom and Dad offered to have the party at their house so that I wouldn’t have to rent the shelter at the playground.  The kids could jump on the new trampoline and play in the backyard.  We even brought over the bounce house from my Aunt Lisa’s and set it up in the driveway.  It was perfect!!  All of the kids from school that he specifically wanted to invite were there, along with his cousins and some friends from church.  Here is what it looked like…. 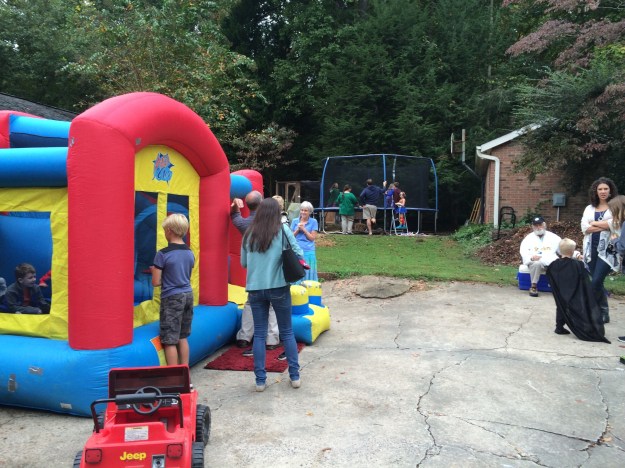 Here are all the kids along with John dressed up at Captain America. 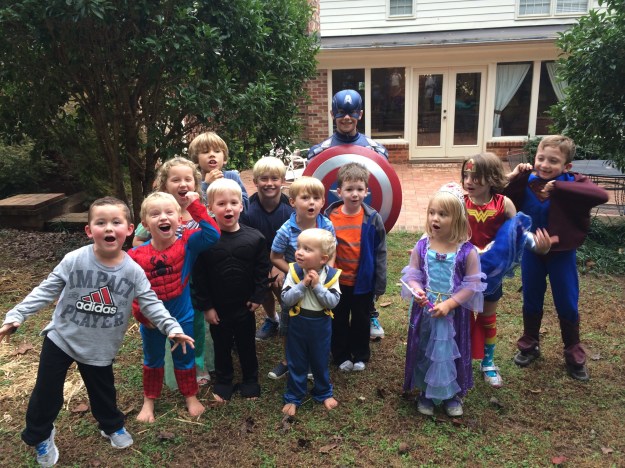 Every normal picture must be followed up by a silly face picture…. 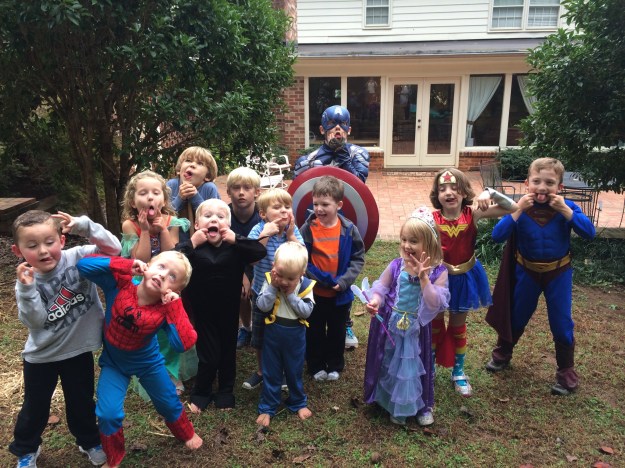 We tied the pinata to the swingset and let the kids hit it with a plastic hammer.  This worked great because each kid could hit is five times and it still didn’t break.  Eventually the pinata fell to the ground and then Tom held it while Wilson beat the crap out of it with a real stick.  There was more than enough candy for everyone. 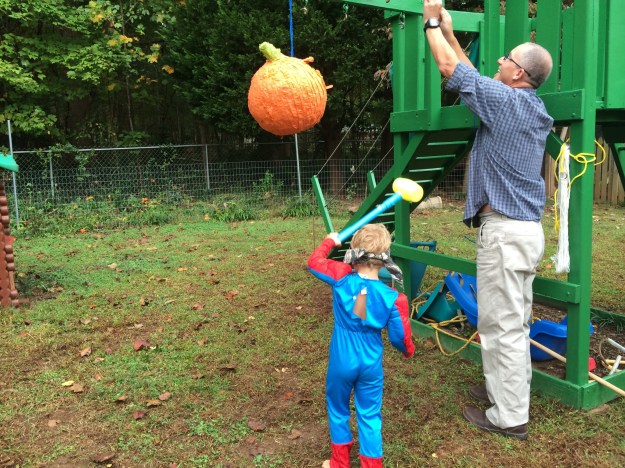 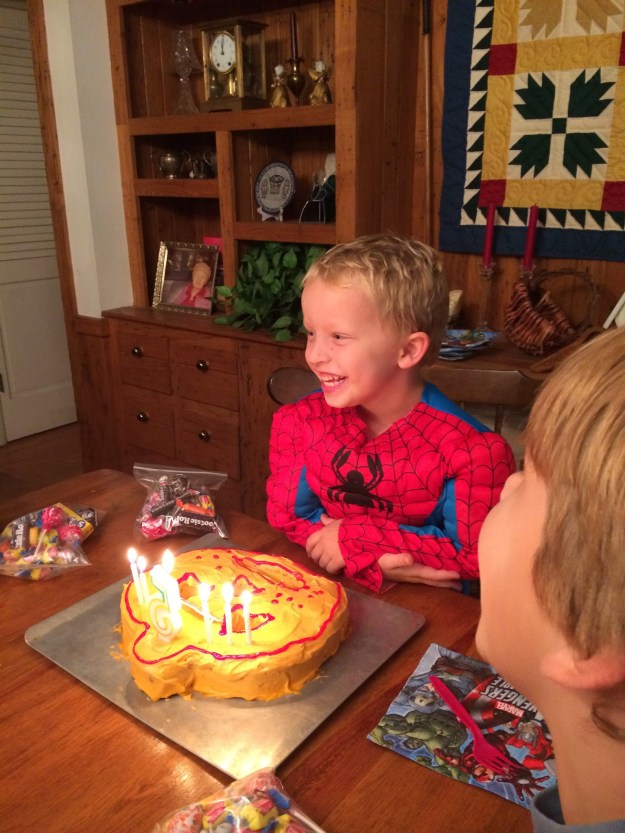 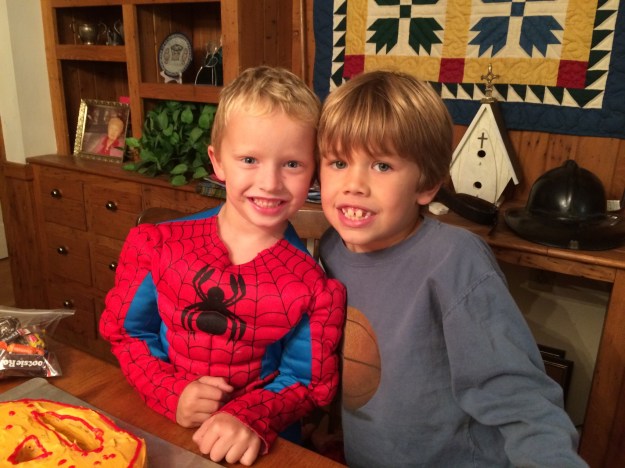 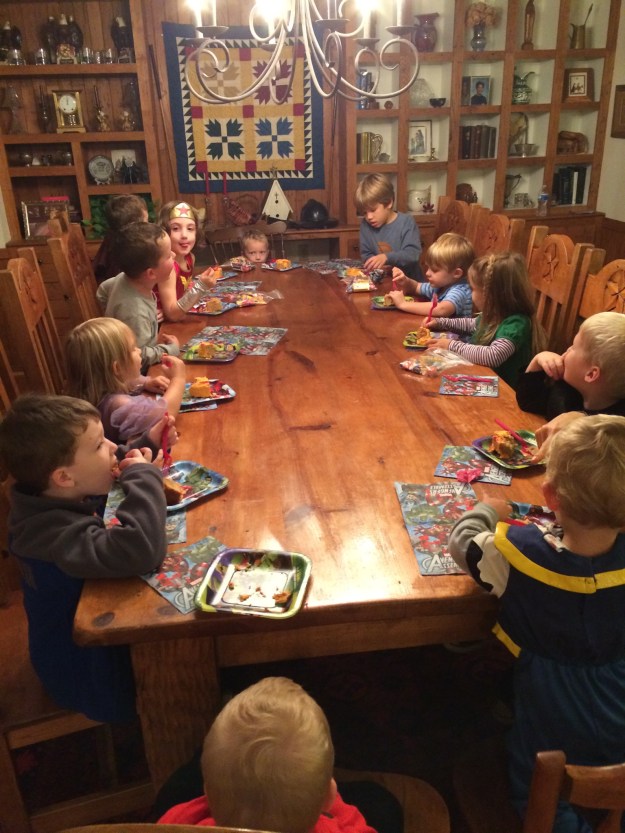 We always try to get a family picture at the birthday parties.  Unfortunately, Tom was eating a big ole piece of candy…… 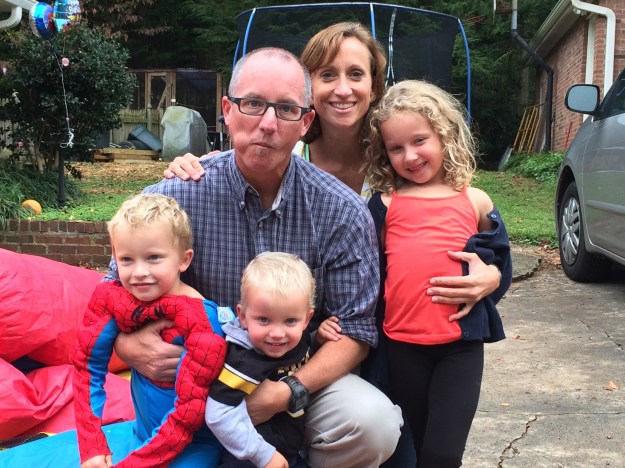 Wilson is my sweet little five year old!!  He is such a joy to be around.  He tries my patience like the best of them, but deep down he just wants to make everyone laugh and to have a good time.

Here he is at school with his birthday crown on.  Happy Birthday Wilson!! 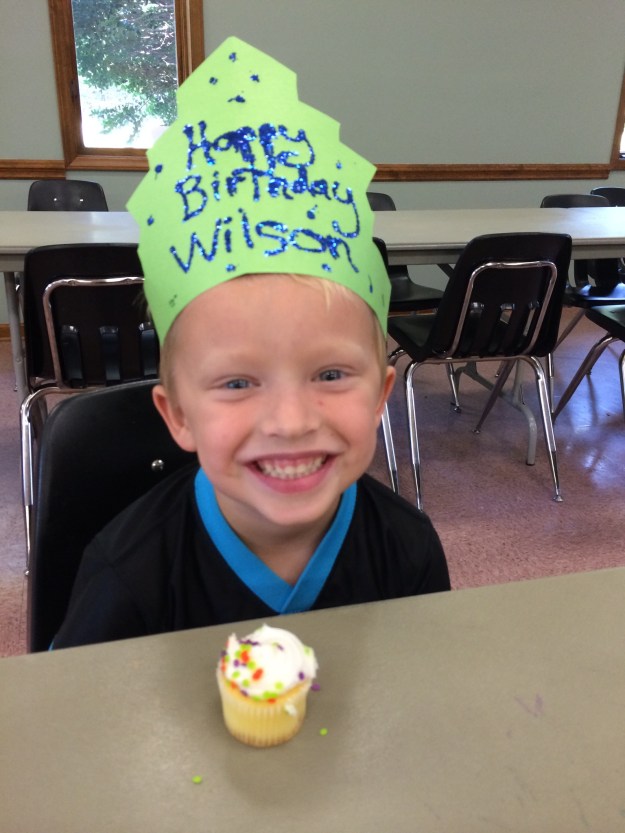 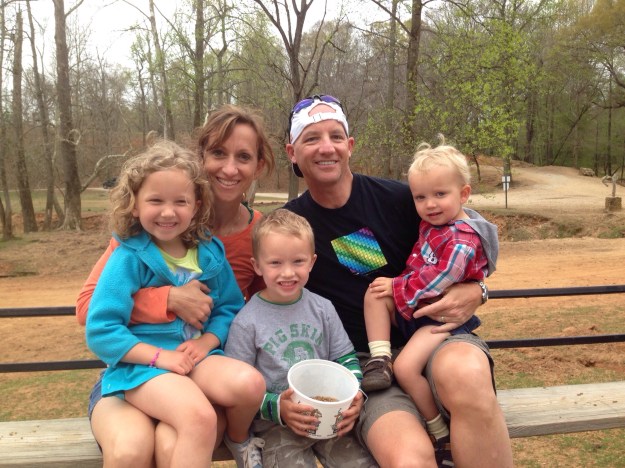 Spring Break has begun and we wanted to start it off right with a fun, family day trip.  We went up to Moorsville to the Lazy Five Ranch – an animal reserve/zoo where we could see, touch and feed the animals up close.  It was so much fun!  I enjoyed it as much as the kids.  We payed a little extra to ride on the horse drawn wagon through the park.  We were given many buckets of animal feed on our open air wagon.  The animals came right up to the wagon.  Some even stuck their noses under our seats to get at the buckets.  Wilson was not scared at all.  He fed deer, Brama bulls, a zebra, goats, water buffalo, bison, and many, many other wild animals that you don’t get to see up close.  Faith sat in the middle of the wagon – she is afraid of most animals, but enjoyed looking at them all.

One of our favorite parts was feeding the giraffes.  They put their long necks down over the fence and ate from our bucket.  Very cool…. 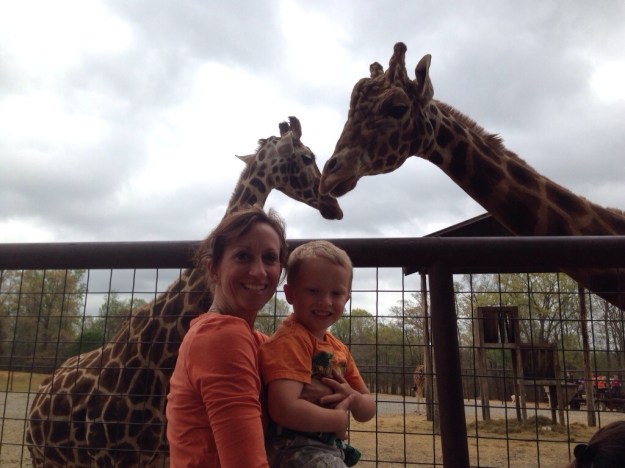 Here is how up close and personal we got with some of the animals…. 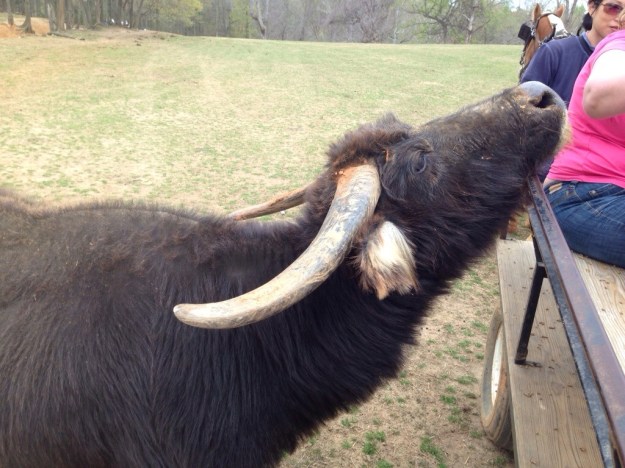 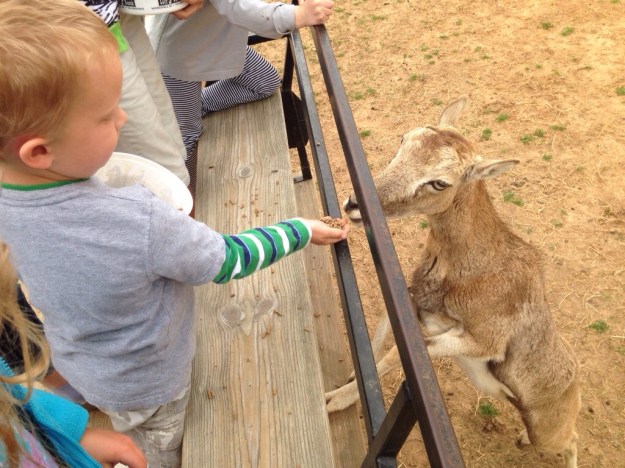 After the hour long wagon ride we went to the picnic area to eat lunch and play on the playground.  The kids loved the playground that looked like a wooden ship.  There was also another animal area where we could pet goats and camels and see many exotic birds.  A peacock roamed the parking lot.  We were there almost three hours and could have stayed longer.

It was a great family adventure.  We will definitely be going back to the Lazy 5 for many years to come. 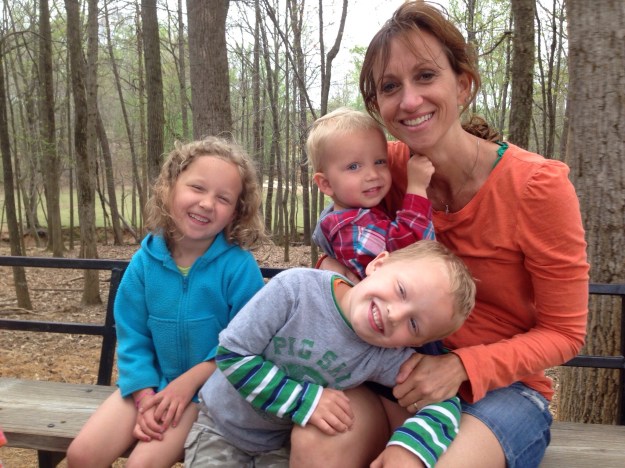 When Faith turned three, I was a few months late getting her to the doctor for her check up.  Now she has to wait until a full year has passed before she can have another one.  She now has her birthday check up in February.  Oh well!

It was finally time for her five year old check up.  Faith asked me for days before her appointment if she would be getting a shot.  She had seen Miller and Wilson get one within the last few months and she was not happy about the prospect of getting one herself.  I told her that I wasn’t sure if she was going to get a shot or not, even though I figured she would.

On the way to the appointment I explained to her that she would probably be getting a shot.  Then I explained that she might even have to get two of them.  I told her that she had two choices:  she could get both shots today or she could get one shot today and another shot this summer.  It was her choice.  She maturely decided that she would rather get both shots today and “get it over with”.  And she did!  She bravely endured two shots in the arm and was very happy to learn that she wouldn’t be getting any more shots until she was 12.

Here are her five-year-old stats: 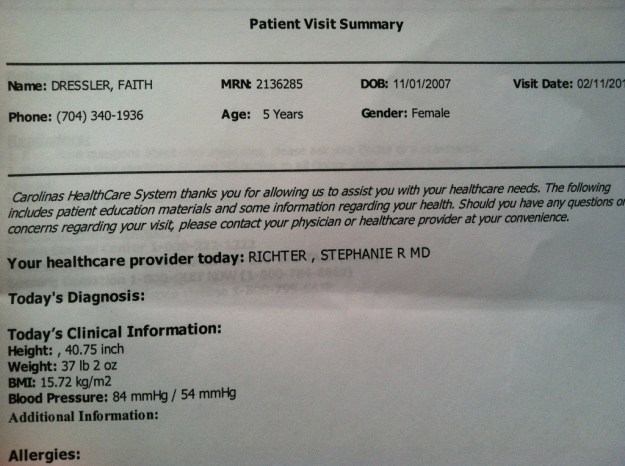