Wilson has grown up right before my eyes over the last month or two. This transformation is so evident that I believe he deserves his own blog post.  He hasn’t been a baby in a very long time but this little man is so new to me.

He has really matured with his school work.  He used to insist on holding his pencil like a caveman, but all of a sudden he has decided to hold it the right way, and actually write for pleasure.  He has begun drawing pictures and writing notes to us. He even drew a chart of his dresser drawer contents and hung it up for reference. He is constantly asking for paper and markers. This is a picture that he drew a few weeks ago that surprised me (not because it is a person with a sword through his head) but because it is really good and creative.  I had no idea that he could draw. 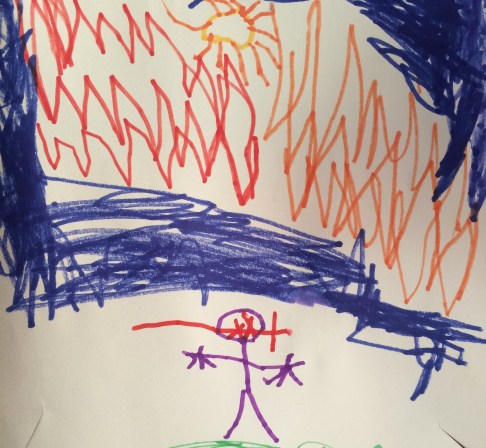 For years he insisted on wearing pajamas all day long and I had to force him to wear real clothes.  Now he has begun to pride himself on getting handsomely dressed and fixing his hair all by himself.  He is choosing to wear collared shirts from his closet and pants with a zipper.  Here is what he wore today… 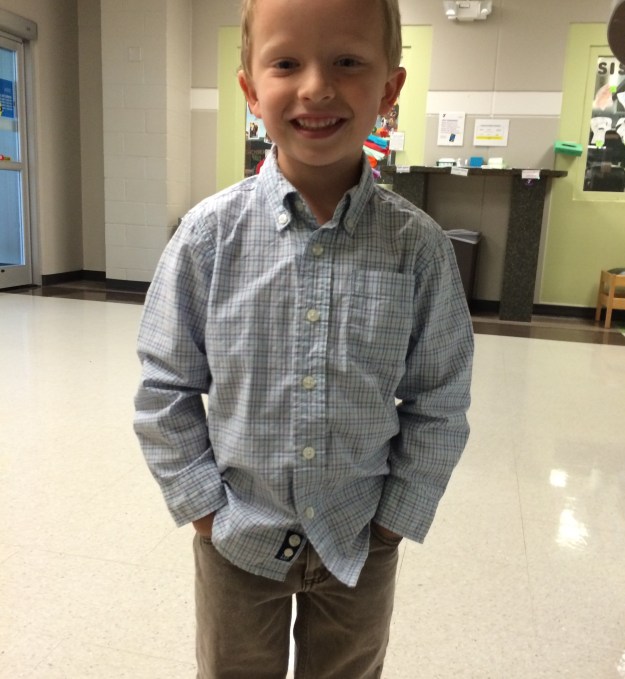 His reading is improving as well.  Wilson has begun to read short books and asks for me to make him flashcards with sight words on them.   Who is this kid?!?!  I am so proud of him.  He doesn’t react or hit back when Miller does something mean to him and he often offers to help Miller.  Wilson loves to make his own food (even if it is a mayo and mustard sandwich) and I am definitely encouraging that behavior…one less thing for me to do.  Basically, Wilson is becoming a huge help to me.  He wants to please us and is getting the positive attention that he is wanting and deserves.  The changes within him are so visible and tangible, and I couldn’t be more proud.

Miller is now 27 months old.  I love it when they turn two because then I can just say that he is “2”.  It is much easier than counting months.  But for the sake of accurate blogging and remembering how old, or young, he actually is, I will say that he just turned 27 months old….a young two.  The things that he can do and say at this age amaze me daily.  He knows most of his colors, loves to draw, and can do puzzles without the picture under the piece.  He can count to ten and sing part of the ABC song.

His vocabulary and verbal skills are quite abundant.  He says things like, “I want to watch the Neverland Pirates, Mommy.”  or “I don’t want the blue blanket.” or “Let’s go outside and play soccer. Come on!”  I love that he can communicate so clearly.  Of course, some of the words are ones that only a mother could understand, but others are quite clear.  Today I leaned over in the car, kissed his cheek and said, “I love you, Miller.”  He told me for the first time, “I love you.”  It almost made me cry.

His athletic interest and skills are also amazing.  He can set up and hit a tee-ball, dribble a soccer ball across the field, swing a golf club and actually hit the ball, and throw a frisbee (in the wrong direction).  Not bad for a two year old.  He even slept with his soccer ball last night.  You could say that he is a bit obsessed.

I am hoping that his interest in sports will lead to a very lucrative job when he grows up.  For now,  I am just trying to play with him in the front yard as much as possible.  He enjoys it and it is nice to get outside.

He will occasionally get into trouble, but not often.  His biggest crime is dumping a bucket of blocks out and refusing to help clean them up.  I put him into time out (which he doesn’t mind), but he will help clean up after that.  He does copy me occasionally which isn’t always a good thing.  This past December he looked at Faith one day and said, “Shush it, Faith.”  Shush it!?!?  Where did he get that?, I thought.  Then I realized that he got it from me.  I never even realized that I said it, but he did.  It was very funny and cute when he said it, but it had to be controlled.  Everyone was being told to “shush it!”.  Even me.

I am trying to remember so much about this time in his life.  I am so glad that I can write all of this down and have it to remember later in life.  I have enjoyed being able to watch him grow and learn.  Physically he is still pretty small, but I like it.  I can pretend that I have a small baby for a little while longer….a small baby that talks, reasons, and plays sports.